Images of armed soldiers blocking nine African-American high school students from integrating a public high school in Little Rock, Ark. shocked the world nearly 60 years ago. Organs of Soviet propaganda, determined to disrupt perceptions of a tranquil American democracy, wrote of American police “who abuse human dignity and stoop to the level of animals” in the newspaper Izvestia. In the midst of stiff Cold War competition for hearts and minds around the world, the prospect of controlling international perceptions motivated officials at the highest levels of U.S. government to support new civil rights measures.

The U.S. representative to the United Nations warned President Dwight Eisenhower that the incident had damaged American influence, and the President listened.

“Before Eisenhower sent in the troops, there were mobs around the school for weeks, keeping these high school students from going to school,” says Mary Dudziak, a professor at Emory whose book Cold War Civil Rights argues that international pressures encouraged the federal government to work to improve civil rights, and which tells the above story about Little Rock. “The issue caused people from other countries to wonder whether the U.S. had a commitment to human rights.”

Today, the highly-publicized killings of unarmed black men like Michael Brown and Eric Garner have attracted similar international condemnation, and some historians wonder whether concerns about U.S. appearances around the world could once again influence the federal government.

Read More: One Man. One March. One Speech. One Dream.

During the Cold War, the Soviet Union, the sworn enemy of the U.S., had a lot to gain by showing that American democracy wasn’t all it was cracked up to be. The opposition of today’s day and age are less influential, but they appear equally eager to highlight American dysfunction. Iran’s Supreme Leader Ali Khamenei used the attention surrounding Michael Brown to remind his Twitter followers of America’s history on race issues. A tweet from the leader features images of police dogs in Birmingham during the Civil Rights Movement alongside an image of Michael Brown:

North Korea may have one of the world’s worst human rights records, but that didn’t stop the country from criticizing the U.S. for “wantonly violating the human rights where people are subject to discrimination and humiliation due to their races.”

It’s not surprising that North Korea and Iran would criticize the U.S., but the reprimanding hasn’t been limited to opponents. The U.N. High Commissioner for Human Rights said he is unsure whether the decision not to indict the police officer who shot Michael Brown “conforms with international human rights law.”

“It is clear that, at least among some sectors of the population, there is a deep and festering lack of confidence in the fairness of the justice and law enforcement systems,” Zeid Ra’ad Al Hussein, U.N. high commissioner for human rights, said in a statement.

Criticism from the U.N. is significant, but the international body’s desires, much less those of North Korea or Iran, have never driven U.S. policy — and the fact is, while there are many links between the Cold War era and today, times have changed. Thus far, the President has walked a fine line in his response. He proposed some measures, including encouraging police to wear body cameras, but it seems unlikely that he’ll be proposing any game-changing legislation like the Civil Rights Act of 1964.

It’s not surprising that Obama has hesitated to involve the federal government in what is typically a local or state issue. The international mandate simply isn’t as strong as it was during the Cold War. There’s no equivalent to the Soviet Union offering a credible alternative to America’s system of governance.

But that may not be the case forever: historians and political scientists say that a growing movement against police brutality has the potential to increase international pressure and, perhaps, force change.

Movements to end police brutality don’t yet have the “same kind of legs” that the Civil Rights Movement had, Valelly says. This year’s demonstrations have been attention-grabbing — and the “Justice for All” March planned for Washington, D.C, this Saturday is certain to make headlines — but it may take many more years of sustained protest before the movement would be noticed internationally on a much larger scale, as the Civil Rights Movement of the 1960s was. For now, experts in the field still remain optimistic about the benefits of international attention, relatively minor though it may be.

“Public diplomacy begins with listening,” says Nick Cull, a professor at the University of Southern California, “and this would be a really good time to listen.” 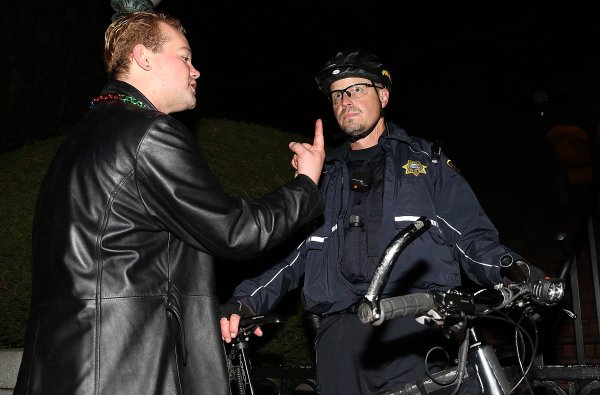 Oakland Police Department Site Down in Apparent Hack
Next Up: Editor's Pick