The Second Most Popular Form of Birth Control Will Surprise You

About 62% of U.S. women from ages 15 to 44 use some form of contraception, and predictably, the pill is still the most popular. About 16% of women used it in 2011-2013, finds the latest report from the Centers for Disease Control and Prevention’s (CDC) National Center for Health Statistics.

But the second most popular contraceptive may come as a surprise to many: 15.5% of women—just a hair behind the pill—choose female sterilization. The CDC report shows that nearly one in three women ages 35 to 44 opted for female sterilization. By contrast, fewer than 1% of women between ages 15 to 24 chose it.

The rates of women choosing to undergo the simple, yet irreversible, surgical procedure might seem high, “until you start to peel back the layers and intricacies around forming a family,” says Dr. Vanessa Cullins, vice president of external medical affairs at Planned Parenthood Federation of America, who was not involved with the research. “Consider the fact that the majority of women in this country have had the number of children they want to have by mid-twenties to thirty or so—and they still have the capacity to get pregnant until they are 50 years old.” For a lot of women, that can mean 20 fertile years during which a woman may not want to become pregnant.

Cullins says women who tend to ask about sterilization don’t want to be bothered by other methods, even those that only require intervention every few years. The overall rate is slightly less than previous years, the CDC says, and Cullins says she expects the rate to continue to decline as long-acting contraceptives, especially the intrauterine device (IUD), become more popular and more affordable in the U.S.

But for now, the pill, female sterilization and condoms are more popular than the IUD. Long-acting reversible contraceptives, like the IUD and implant, remained stable from prior years, at 7.2% of women. They were most popular among women aged 25 to 34 and less popular among younger, sexually active women between ages 15 to 24. Women between ages 35 and 44 were the least likely to use them.

Because the IUD is much more convenient than the pill, with a lower failure rate, it may prove to be a bigger birth control contender in the future, some health experts say. And there are signs that with increased affordability and access, young women will opt for it. One recent study showed that when teenage girls were counseled about birth control and given their pick for free, a full 72% of them chose the IUD. 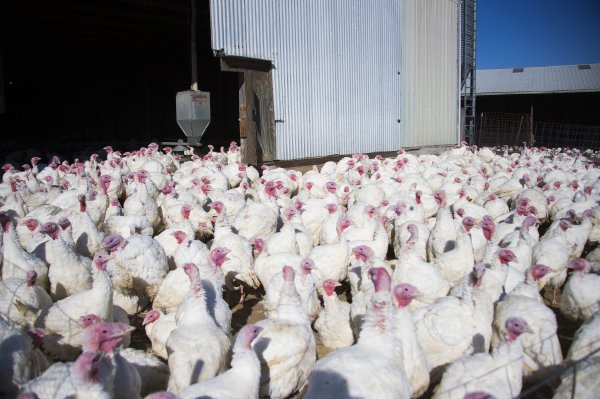 Avian Flu Spreads In Canada
Next Up: Editor's Pick