Hong Kong police on Wednesday and Thursday arrested several dissidents at or near their homes, as authorities concurrently prepared to clear the city’s main protest camp.

Wong Yeung-tat, head of the anti-Beijing organization Civic Passion, was arrested near his home at 1 p.m. on Thursday on 59 counts of unlawful assembly, according to his party’s news outlet.

Home arrests on Wednesday included: Alvin Cheng, the leader of a hard-line group, Student Front, which rejects nonviolence; Anthony So, a member of People Power, a far-left political party; and Raphael Wong, vice chairman of the League of Social Democrats.

The three arrests, on suspicion of unlawful assembly, were reported by the government-funded Radio Television Hong Kong.

Civic Passion is perhaps the most recognizable of the vocal, insistent groups at the fringes of Hong Kong’s democratic movement. It has had choice words not just for the government, but for the protest’s unofficial student leaders, accusing them of timidity in confronting the government for the right to free and fair elections here.

The spate of arrests shortly preceded the arrival of police at the protest camp in Admiralty district, where they began dismantling the sprawling tent settlement. Protesters have spent more than two months in the camp to seek, against tough odds, the right to freely elect the city’s head of government. 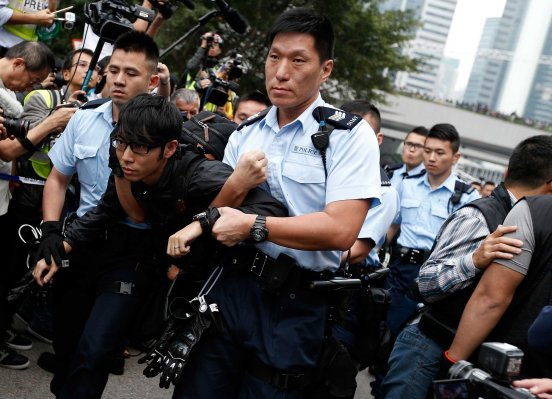