Authorities arrested leading figures in Hong Kong’s democracy movement while clearing the city’s largest protest camp on Thursday, putting an end to a 75-day street occupation that has been a flashpoint for a bitter confrontation between pro-democracy protesters and the Hong Kong authorities, as well as the central government in Beijing.

Police brusquely tore down hundreds if not thousands of tents in Hong Kong’s Admiralty district, enforcing an injunction won by a local bus company against the protesters, who have been blocking some of Hong Kong Island’s most vital roads. The occupation of the upscale commercial district — which is also home to government offices and the local military headquarters — was the main push of a student-led protest calling for free elections.

In a methodical process that took hours, officers led the arrested protesters one by one to police vans and carried out those who refused to walk. Student protest leader Alex Chow, who rallied the crowd over a microphone as the group awaited arrest, was among the last protesters escorted by police out of the former protest site on Thursday night.

Hundreds of other protesters filed out of the camp through designated exits on Thursday afternoon, turning over required identification information to police as they left. One officer said the information was needed “for our follow-up, because this is an unlawful assembly.” Police had reiterated on Wednesday that the street occupations were illegal and that anyone still on the streets during the clearance risked arrest.

Most protesters said Thursday morning that they had returned to the camp not to resist the clearance, but to witness what they called the beginning of another era in a long-term democratic movement.

“This is definitely not the end of the movement,” lawmaker Leong told TIME just hours before his arrest. “With this awakening of the Hong Kong people, we have sown the seeds for the next wave of the democratization movement.”

Chow, the student leader who was later arrested, told reporters before the clearing that he was “very optimistic that people will be coming out again.” “People in Hong Kong have changed,” he said.

Workers began demolition at the camp’s periphery at around 10:30 a.m., cutting and sawing at barricades fashioned from bamboo poles and crowd-control barriers that had been seized from police in the early days of the so-called Umbrella Revolution. Facing them was 12-year-old student, Jimmy Chow — exemplifying the youth of many of the demonstrators, among whom high school students in uniform have been frequently seen. He was poised to launch a paper airplane on which he had written that the government was “criminal,” but under the gaze of bailiffs decided not to throw it.

Nearby, workers pulled down a barricade with a banner reading, “It’s just the beginning” — words of defiance from the protesters, but a phrase that could be equally read as a warning to them from the demolition crews forming on Connaught Road.

Though the injunction covered just part of the protest site, police had also said they would dismantle the entire camp on Thursday afternoon. For the most part, they met little resistance in disassembling a formerly neat encampment into a sprawl of tarps and spare wood. Many demonstrators had left before police began their clearance, packing up the boxes of crackers and cakes that have fed this movement, rolling up their sleeping mats, and leaving the streets behind.

It was also an injunction won by transport companies that quickly felled a protest encampment last month in Mong Kok, a blue-collar neighborhood in the heart of the Kowloon peninsula. Demonstrators in Admiralty said that they were powerless to prevent the new clearance and wondered what was next.

“I feel hopeless,” says Kevin Choi, 26, an engineer, dismounting a skateboard he was riding through the increasingly sparse protest site. “There’s no direction after this.”

Yet some protesters said that they were, in other ways, stronger then ever.

“I don’t think we can stop the police,” said Frank Cho, 21, a student sitting on a concrete highway divider, just before the teardown began. But, he continued, “In two or three months, we will come out with bigger numbers and stronger faith.”

Since late September, Admiralty district has served as the heart of the pro-democracy movement. It has been home to a village of tents whose color and size have been in stark opposition to the grey, titanic government headquarters looming near them, yet whose smoothness of operation would be the pride of any civil servant.

The village has been an incubator to a generation of politicized Hong Kongers. Yet it had fallen on hard times in recent weeks. The weather turned wet and cold. Numbers that had, in October, reached the tens of thousands bottomed out to the hundreds by November. Morale fell further when student leader Joshua Wong — one of TIME’s Most Influential Teens for 2014 — and other students began a hunger strike then quietly ended it after failing to move po-faced government officials to restart talks. By the time Wong called off his fast, at 108 hours, he was in a wheelchair.

Numbers returned in the past couple of days as Hong Kongers came to say farewell to what has become one of the most significant sites in their history — and may one day prove to be one in China’s too. Many took photos and videos of the posters, the people, and the protest art and other landmarks found throughout the village, which protesters called Umbrella Square.

Some carried on as usual, diligently tending to homework in the tarpaulin-covered study area. Others just draped their elbows over the flyovers that have been popular lookout points, watching and waiting. The Lennon Wall, an internationally recognized expanse of concrete that had, for the past 75 days, borne brightly colored Post-it notes of support from all over the world, was stripped almost bare, its messages to be archived by volunteers.

The night before the teardown, protesters had flung yellow confetti and glitter into the air, celebrating a beginning, not an end. At the far reaches of Harcourt Road, the tarmac was still thickly strewn with it, and it glittered in the weak early morning sun of Thursday. Chalked, posted and hung on banners everywhere was the promise “We’ll be back.”

Most Popular on TIME
1
50 Cent Says Donald Trump's Campaign Offered Him $500,000 to Help Appeal to Black Voters
2
The Disastrous Swedish Approach to Fighting COVID-19
3
What's Your Risk Tolerance for COVID-19? 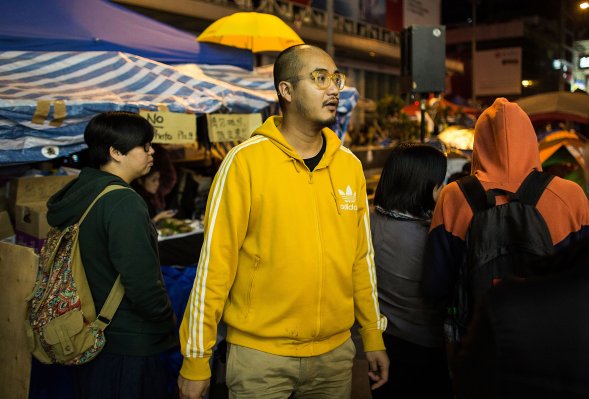