“It’s groovy,” says a voice identifying itself as private detective Larry “Doc” Sportello, talking about his stoner life in an L.A. coastal town in 1970. “Or I guess it was groovy, till one night my ex-old lady shows up with a story about her boyfriend, or actually older guy friend, and his wife and her boyfriend, At that point it gets sort of peculiar.” The voice we hear in a 2009 video promo for the novel Inherent Vice is that of its author, Thomas Pynchon, whom we are obliged to call reclusive, though he sort of showed up as himself on two episodes of The Simpsons. At one time it was rumored that Pynchon would make a furtive cameo appearance in Paul Thomas Anderson’s Inherent Vice movie. For a hermit, the writer seems pretty gregarious.

Pynchon meets Anderson: that sounds intimidating. One thinks of the sprawl of characters, the collision of authorial tones, the hailstorm of literary references in such dense doorstops as Gravity’s Rainbow, Mason & Dixon and Against the Day. It’s not surprising that no film until now has been made of a Pynchon novel, or that Anderson would be the first to try. His films are every bit as ambitious, convening dozens of performers and plot strands in Boogie Nights, Magnolia and The Master, and thundering a jeremiad against capitalism in the sparsely populated but more forbidding There Will Be Blood. To see a movie this guy makes of that guy’s novel, you don’t buy a ticket so much as you cram for a final.

O.K., everybody can relax, as Pynchon did in writing Inherent Vice — TIME’s Richard Lacayo called it “entertainment of a high order” — and as Anderson did in filming it. For both men, and for their audiences, this is a vacation at the beach, albeit one on a stormy day, with the odd corpse washing ashore at high tide. A kind of ’70s bookend to the San Fernando Valley porn shenanigans of Boogie Nights, and apparently aiming for no higher goal than to fulfill Doc’s definition of groovy, Anderson’s IV lays down a shag carpet of sex, drugs and rock ’n roll, with L.A. Dolce Vita best viewed through a marijuana smog.

Set in the fictional Gordito Beach (standing in for Manhattan Beach, the raffish Los Angeles suburb where Pynchon lived in the early ’70s), IV offers a time capsule of attitudes from that precise moment when the Flower Power of hippie culture wilted under the anarchic forces of Vietnam turmoil, the incendiary rhetoric of the Black Panthers and the psycho-killer exploits of the Charles Manson gang. And don’t forget Nixon. It’s a time and town where paranoia is just common sense, for the Gordito lowlifes and the high-strung police. As one cop tells Doc, “Any gathering of three or more civilians is considered a possible cult.”

Pynchon threw all those elements into a private-eye pastiche that takes its cue from Raymond Chandler’s Philip Marlowe, the cynical knight on a ’40s crusade to cleanse the mean streets of Los Angeles. Like Marlowe, Doc (Joaquin Phoenix) wanders through all levels of L.A. society, from high Hollywood to beach bum, from angry cops to shyster lawyers and plutocrats with secrets. And like Chandler, who confessed that he couldn’t explain one of the deaths (the chauffeur’s) in The Big Sleep, Pynchon doesn’t bother tying up his plot’s loose ends. He wants audiences not to worry about the destination, just to enjoy the ride.

For cultural touchstones, consult a Netflix roundup of ’70s post-noir crime movies. IV has inhaled portions of Klute (the nexus of prostitution and big business), Chinatown (property swindles that key the growth of Los Angeles), Night Moves (a sleuth flummoxed by missing daughters and multiple deaths) and especially The Long Goodbye, Robert Altman’s deconstruction of the Chandler novel — and of any hero who tried to make sense of a world spinning into incoherence.

Incoherence is the M.O. of Doc, whom Phoenix plays by borrowing the knowingly slurry drawl that Pynchon used in the novel’s promo, and by wearing mutton chops that sprout like a heat rash across his face. Doc’s phone is turquoise, his beer Budweiser (a sign on the can reads “Burgle!”, as if Anheuser-Busch were aping Abbie Hoffman’s invocation to Steal This Book) and his intake of weed voracious. At times Doc tiptoes like Sylvester the cartoon pussycat; more often he’s supine and sleepy — but he’s all we’ve got as a relatively reliable guide through the proceedings.

True to the promo’s synopsis, Doc’s ex-girlfriend Shasta Ray Hepworth (Katherine Waterston) shows up to say she’s worried that her current beau, real estate magnate Mickey Wolfmann (Eric Roberts) may soon be the victim of a kidnapping engineered by his ritzy wife Sloane (Serena Scott Thomas). In a trice, Mickey vanishes, and Shasta too.

That unlucky juxtaposition gets Doc framed for murder by Bigfoot Bjornsen (Josh Brolin), a righteous cop with a buzz cut who dreams of movie stardom and is frustrated that he gets only bit parts on Jack Webb’s Adam-12. Bigfoot, “a walking civil rights violation” who beats the crap out of Doc (in slow motion), is nonetheless willing to chat up the P.I. to learn what he knows about a mysterious entity called the Golden Fang. (Is it a schooner? a drug cartel? a syndicate of tax-dodging dentists? all of the above?) Reprising the yin-yang antagonism-duality of the main men in There Will Be Blood and The Master, Bigfoot and Doc might share a fraternal vibe — kind of like Cain and Abel — though when Doc absently calls him “bro,” Bigfoot snaps back, “I’m not your brother.” “No,” Doc replies, “but you could use a keeper.”

By now you will have deduced that that the story is mostly played for laughs. Anderson says his style of directing actors was inspired by the farces — Airplane! and Police Squad! and its Naked Gun spinoffs — that David and Jerry Zucker and Jim Abrahams made in the ’80s. But IV has less in common with the Zucker brothers’ tightly-wound, deadpan approach than with the Coen brothers at their louchest. It’s The Big Sleep played as The Big Lebowski.

Some of the humor is sly, as in the description of one miscreant whose forced his victim “to listen to the cast albums of Broadway musicals while he had his way with her,” or in a phone call the alluring Penny makes to Doc: she offers to come to his place with a pizza, and says “I can hear your pants growing.” More often, it’s pretty broad: an FBI agent (Timothy Simons, who plays Jonah on Veep) elaborately picking his nose; the coke-snorting Dr. Blatnoyd, who drops trou as he pursues a female patient; and Bigfoot’s fondness for fellating outrageously phallic popsicles — grape, chocolate and banana. Like him, the movie could use a keeper.

Often shooting in medium closeup from below, Anderson gives his actors plenty of time to chew on their lines and do double-take reactions. A few turns stand out. Some are notable just for showing up midway through. Look, there’s Benicio Del Toro as Doc’s shady lawyer; and Maya Rudolph (Anderson’s real-life partner) as Doc’s secretary. Others make a longer, stronger impression. Two-time Tony award winner Jefferson Mays is suitably oleaginous and subtly menacing as the doctor at a EST-like rehab center, which may also be a front for the Golden Fang. Wilson invests Coy with a lost-boy poignancy — but that could also be a ruse, since Coy is playing an informant’s dangerous double game.

Delaine Mitchell has a sharp comic vignette in the role of Bigfoot’s nagging wife (we learn a lot about the cop in those few seconds); Hong Chau reveals a pert intelligence under the cover of a massage-parlor madam; and Donovan is splendid in his one scene as a power broken who lays out a world of evil for Doc’s edification. Best of all is Waterston (daughter of Law & Order’s Sam) as Shasta, a beguiling flower child who’s smarter and more cunning than she lets on. In a sex-and-confession scene with Doc, which lasts six-and-a-half minutes and is shot without a cut, Waterston lends the movie as much human feeling and erotic tension as it’s ever going to accumulate.

For the rest of this 2hr.28min. jape, you’re advised to go with the flow. Never quite transcending the sum of its agreeably disparate parts, IV is less groovy than gnarled and goofy, but in a studied way. Call it an acquired taste with a kinky savor. 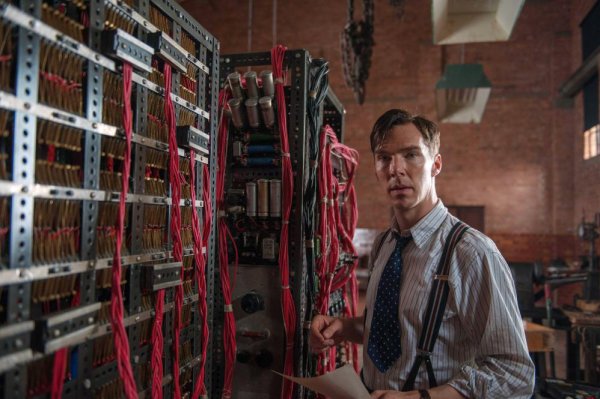 See All the 2015 Golden Globe Best Picture Nominees
Next Up: Editor's Pick