On this day, Dec. 15, in 1988, James Brown began serving a six-year sentence for carrying a deadly weapon at a public gathering, attempting to flee police, and driving under the influence of drugs, as reported in his 2006 New York Times obituary. Rumors of a PCP habit had already surfaced by the time his erratic behavior came to a head in September, when he reportedly stormed into the insurance company next to his office, waving a shotgun and complaining that “strangers were using his bathroom,” as TIME reported in its take on his crime and punishment.

When the police arrived, Brown led them on a high-speed chase through Georgia and South Carolina. He tried to ram police cars with his pickup truck. They shot out two of his tires; he drove on the rims for six miles. Years later, this episode would frame the 2014 Brown biopic Get On Up.

It became the latest entry on a rap sheet that had begun during Brown’s impoverished childhood in rural South Carolina, where he went to prison for the first time at age 15 for breaking into cars. He sang in the prison choir and started a band when he got out. In many ways, his was a classic American bootstrapping success story, fueled by raw talent and unrelenting effort. He became a soul and R&B legend for his innovative songwriting and his impassioned showmanship, influencing performers from Michael Jackson to Mick Jagger. He earned the nicknames he gave himself: “Godfather of Soul,” “Minister of Super Heavy Funk,” and the “Hardest-Working Man in Show Business,” among others.

But despite his staggering successes, he couldn’t stay out of legal trouble for long. The 1980s were a particularly rocky time, according to TIME’s 1988 report on his prison stint, which noted:

He was freed in 1991 after serving half his six-year sentence for the blowup at the insurance company. But in 1998 he reprised his antics and was arrested again on nearly identical charges: discharging a rifle, this time at his South Carolina home, and leading police on another car chase.

On this occasion he was sentenced to a drug rehabilitation program, although his recovery doesn’t seem to have lasted. In 2004, at age 70, he was arrested on domestic violence charges against his fourth wife. When he died two years later, of congestive heart failure, obituaries listed his arrests alongside his achievements, including a Grammy Lifetime Achievement Award in 1992, Kennedy Center Honors in 2003, and 116 singles on Billboard’s Hot 100 singles chart from 1958 to 1986.

TIME noted in remembering his life that Brown had thrown his full energy into all pursuits in music and in life, including his two police chases. 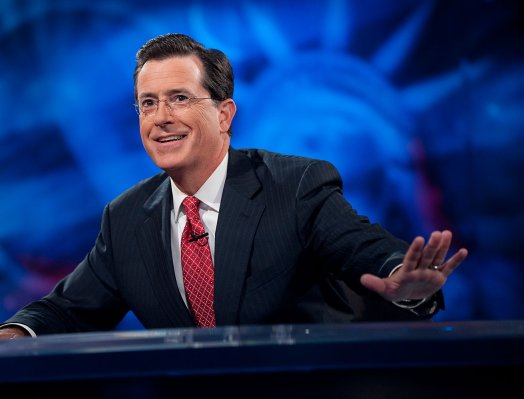 Here's What Critics Said About The Colbert Report When It Premiered
Next Up: Editor's Pick