For decades, the Pentagon has been saying that laser weapons are just around the corner. Thursday, the U.S. military finally turned that corner.

The Navy announced that it had deployed and fired a laser weapon this fall aboard a warship in the Persian Gulf. During a series of test shots, the laser hit and destroyed targets mounted atop a small boat, blasted a six-foot drone from the sky, and destroyed other moving targets.

“This is the first time in recorded history that a directed energy weapons system has ever deployed on anything,” Rear Admiral Matthew Klunder, chief of naval research, told reporters at the Pentagon. “A lot of people talk about it—we decided to go do it.”

The Navy’s laser weapon system—LaWS, in sea-service jargon—was fired from the USS Ponce, a one-time amphibious ship that was converted to an “afloat forward staging base” in 2012 and assigned to the 5th Fleet in Bahrain. Firing a laser from the surface of the Persian Gulf is challenging because heat, humidity, dust and salt water can reduce its power.

The Navy spent about $40 million over the past seven years developing LaWS, which actually consists of six commercial welding lasers lashed together and aimed at the same point. It has proven effective at ranges of up to about a mile.

A chief petty officer, sitting inside the ship’s combat information center, directs the solid-state laser with an Xbox-like controller. It generates about 30 kilowatts of destructive power, roughly equal to 40 horsepower. Three times as much power is lost as heat rather than light.

Navy officers say the weapon’s power is adjustable, ranging from distract to disable to destroy. They added it would be ideal for asymmetric threats, including small attack boats (a favorite tactic of Iran, which undoubtedly was paying close attention to the tests off its shore). U.S. Central Command has given the Ponce’s skipper approval to use the laser for self-defense, if needed.

“Light from a laser beam can reach a target almost instantly,” a July congressional report said. “After disabling one target, a laser can be redirected in several seconds to another target. Fast engagement times can be particularly important in situations, such as near-shore operations, where missiles, rockets, artillery shells, and mortars could be fired at Navy ships from relatively close distances.”

But lasers can be disabled by bad weather, and are limited to line-of-sight confrontations. Initially, they’ll complement a warship’s traditional longer-range guns and missiles. The lessons learned from the Ponce tests will be cranked into a new generation of laser weaponry, which the Navy hopes to begin installing on the fleet in the early 2020s.

Such weapons are safer than traditional shells and missiles, which are crammed with explosives and propellant. They’re considerably cheaper, too: the energy required to fire the Ponce’s laser costs 59 cents a shot, compared to a shell or missile, which can cost $1 million or more. 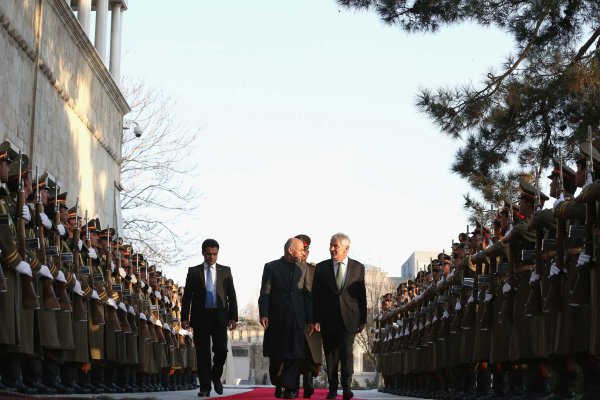 U.S. Plans to Keep 1,000 Additional Troops in Afghanistan
Next Up: Editor's Pick