In the early months of an Ebola epidemic that has claimed more than 6,000 lives in West Africa, Getty Images photographer John Moore was on the frontline in Liberia.

At that time, untrained medical workers fell victim to the virus, with hospitals and clinics unable to handle the rising number of cases. Moore’s harrowing images, published on TIME LightBox in August, crystallized these challenges. “I went relatively early on to cover the Liberia outbreak,” he says. “And I hope that my work had at least some small influence on mobilizing aid, [helping to] instill a sense of urgency into the international community.”

Moore spent a total of four weeks on the story, and he advised several other photographers on the crucial and life-saving procedures one has to carefully follow to prevent infection. “I was very happy to see other news organizations go to West Africa afterwards and expand the coverage,” says Moore. “I believe that with a humanitarian crisis like this, more media is better. In the case of Liberia, there were actually fewer media there than there would normally be on such a large story. Perhaps fear had something to do with that.”

With the virus posing an invisible risk, many news organizations have been reticent to send journalists and photographers to cover the outbreak. But, says Moore, while the epidemic has “the appearance of being too dangerous, in reality, I believe it was less dangerous than some of the other places I’ve been and worked consistently over the years like Afghanistan and Iraq.”

Today, the situation has improved, with scientists and healthcare workers fighting back—and the Ebola Fighters were selected as TIME’s Person of the Year. But the fight is far from over, as recent work from photographers Daniel Berehulak, Samuel Aranda and Pete Muller, among many others, can attest.

Moore plans on returning, as he tells TIME in an exclusive video interview: “I don’t know yet the timing of my return, but I’ll go back to West Africa.”

Olivier Laurent is the editor of TIME LightBox. Follow him on Twitter and Instagram @olivierclaurent. Paul Moakley, TIME’s Deputy Director of Photography, produced this video essay. 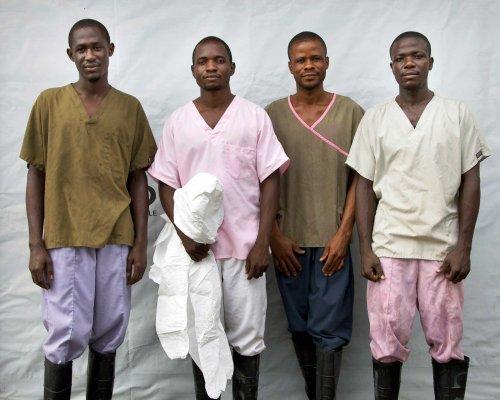 Photographing TIME's Person of the Year in Africa, Europe and the U.S.
Next Up: Editor's Pick