On Thursday, Nov. 20, after months of research, debate and deliberation over how to cover the Ebola outbreak in western Africa, I received the green light to go to Liberia with photographer Jackie Nickerson. I stayed up late writing letters to the Liberian consulates and e-mails to set our plans. We both had less than 24 hours to get visas and equipment. I was in New York and Jackie was in Paris for a shoot.

I’ve been an admirer of Jackie’s work since she released her book Faith in 2007, and I have always wanted to collaborate with her. Much of Jackie’s fine-art work has taken her all over Africa from Congo and Malawi to Mozambique and Zimbabwe, where she lived for many years on a farm. In her portraiture, Jackie maintains a gentle distance from her subjects that allows her to capture something intimate, heroic and modern. What’s most evident in the work is a sense of strength and optimism that she finds in the people she depicts. Through those qualities, she manages to tell a story about each person she photographs. Her subtle way of seeing individuals became a template for a series of portraits about the people on the front lines fighting the deadly Ebola virus.

On Friday, I woke up early so I’d be the first person at the Liberian consulate. It was totally empty and I sensed they were surprised that someone wanted to apply for a visa. I was afraid they would deny it to me if I said that I was a journalist looking to cover Ebola. And, of course that was the first question the administrator asked me. I said, “Yes.” After a few tense minutes of her looking at my passport and discussing the matter on the phone, she matter-of-factly handed me a receipt for a visa and told me to pick it up in three hours. The next day, I was at the airport.

In a strange way, going to Liberia felt like something I was destined to do. In 2008, I’d curated Tim Hetherington’s first show in New York of his photographs of the Liberian Civil War. He had taught me everything I knew about it. The West African country was fractured first by a war and now by a deadly disease that has killed thousands of people and altered every aspect of life there.

We landed in Monrovia, Liberia’s capital, stepping off the plane and into the heat and the dense humid air. In the darkness, I saw a group of airport workers in masks and gloves who led us to a bus. My nerves began to wind up. We rode the shuttle to the arrivals entrance with military personnel and healthcare workers. As we got off the bus, we were instructed to wash our hands with chlorine solution and had our temperatures taken for the first time–a ritual that we would repeat countless times over our stay.

When we walked out of the airport, I saw Aryn Baker, TIME’s Africa Bureau Chief. “I would hug you but that’s not something we do in public here,” Aryn said. She introduced us to our driver and fixer Frank, who’s worked with other journalists and photographers such as John Moore.

During the ride, the highway’s darkness was broken up by small towns, silhouettes of people walking next to the road and billboards advertising how to spot the signs of Ebola. We arrived at the hotel where we, once again, had to wash our hands with chlorine and our temperatures taken. I started to feel uneasy about everything I touched.

The next morning, we went out to photograph a member of the burial teams. Each day, he and men like him go out in teams to clear out dead bodies from homes and hospitals. Incredibly not one of these men, who were trained very quickly, has ever been infected. We began shooting portraits in the middle of a chaotic scene, as these men got ready to work. They were loading trucks with personal protective equipment and sprayer pumps of bleach.

One man I met, named Morris Kanneh, 45, was one of the oldest members of the team. When I asked why he agreed to do this work, he said, “This is my home. My brothers are just dying from this disease. I have to work for my country.”

Most of the men spoke with pride, showing no fear of what they were doing. They were motivated, knowing that they were doing the most dangerous and necessary job in their country. We decided to photograph as many of them as we could in the time we had; this moment set the breakneck pace of the entire trip.

Each day we drove through the city from location to location. Aryn found an incredible cross-section of people, mostly Liberians. They have a deep love for the country and its people, who are fighting to stay alive.

We met Dr. Philip Ireland. He survived the disease and wanted nothing more than to start working again. We spoke with nurses, ambulance drivers, educators, government workers and a few foreigners who all made a decision at some point this year that they couldn’t just sit on the sidelines while Liberia lost its grip on the outbreak, its hospitals overflowing and its people dying in the streets or in holding centers that couldn’t offer any help.

On the second day of shooting, we waited for Dr. Jerry Brown, 46, the medical director and general surgeon at the Eternal Love Winning Africa Hospital in Monrovia. We ended up seeing a burial team as it prepared to bring out the dead from ELWA hospital. They got dressed on the road outside, pulled their truck up to the front gate and disappeared into the hospital only to return carrying a stretcher with a white body bag on it. They lifted it into the truck and unloaded it. We heard the dull thump of the bag hitting the flatbed. They did this three times; one of the bags looked like it was holding a child. There would be no funeral for these people, no loved ones sharing remembrances, just a mass cremation far away from the city that night.

All I could think about was how no family members were present to witness this final moment. All I could do was hold my head down in respect.

It was heartbreaking–an unreal way to imagine the end of a life. I walked back towards the car and saw a member of the burial team, now out of his protective gear, pacing in the field alone, away from the rest of his crew who waited in the car to go to the next pick up.

The next day we spent time with Brown. You could see the pressure he was under all day. His phone rang constantly, yet he was thoughtful and calm when he spoke. To relieve some of the stigma faced by Ebola survivors, Dr. Brown has turned their departure from the hospital into a kind of ceremony. He gives each person a certificate that looks like a diploma–an actual clean bill of health. I watched him fill out the certificates with a great sense of pride, his nursing staff surrounding him.

We watched Brown get dressed in protective gear to do his rounds inside the Ebola hospital. He put on every layer of plastic with precision and Jackie recorded the process. Through her photographs, you can see in Brown’s eyes just how tired he is, you can see the weight of every decision he has to make each day.

That day happened to be Thanksgiving. All of these doctors, nurses and janitors showed such life while facing a deadly disease. They were joyous in what they were doing, even as a burial team arrived almost every day to pick up victims who did not survive. They were doing everything in their power to help.

The news around the world was turbulent and dark this year. And yet these pictures and stories inspire and offer hope. “If you have the ability to do something, which every single person does. You have to do it,” Katie Meyler, the founder of More Than Me, a school for vulnerable girls from the West Point slum of Monrovia, told us. “There’s not really a choice. And maybe not everyone’s gonna get on an airplane for whatever reason to come to Liberia, but everyone can do something from right where they are.”

We photographed many people: this honor is meant equally for the countless others in Liberia and around the world in Sierra Leone, Guinea and any place where people are risking their lives to fight Ebola. For their extraordinary bravery TIME honors all the Ebola fighters. 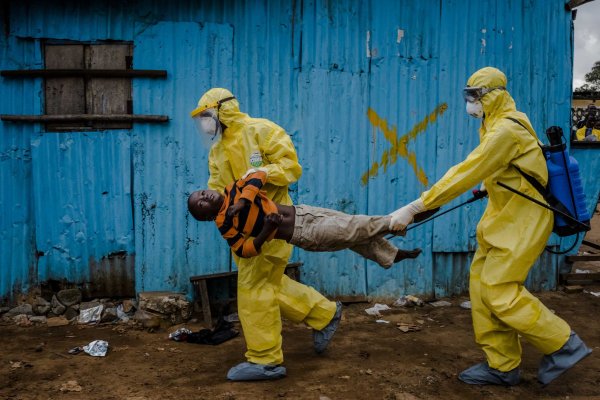