Facebook is making a change this week that, if it works, may finally sound the death knell for Google Plus, the search giant’s rival social network.

One of Facebook’s biggest weaknesses is that its internal search isn’t very robust. If you suddenly remembered your best friend posted about a cool new band on your wall a couple months ago and you wanted to go back and find that post, good luck. It’s the exact opposite experience you might have on Google services like Gmail, which turns your inbox into a vast trove of easily-searchable info.

And that was one of the most promising things about Google Plus, when it launched three years ago: The idea that Google might turn all your online social interactions into an easy-to-search repository. From a user’s perspective, that would be handy because the stuff your friends share directly with you is often more relevant to you than what you can dig up in a general web search.

But Google Plus was even more crucial from Google’s perspective. With more of the content that’s most relevant to us appearing on our social networks rather than the broader web, it makes sense that we might think to search on social media before we search the wider Internet. If Google didn’t have an answer for that potential trend, it could result—in the very long run—in fewer people using its biggest moneymaker, search.

Search remains a vastly profitable business for Google. Revenue from Google-owned websites made up 69% of the company’s total $16.52 billion in revenue for the third quarter of this year. Google doesn’t break out exactly how much of that is from the ads it sells against your search results, but several estimates are in the 50% and up range. And it’s Android platform for cell phones has helped it lock down mobile search, an area as hot as social.

Still, Google’s search business is starting to slow. And that’s where Facebook comes in. The social network announced an improved internal search feature this week that it company promises will make it easier to find stuff our friends shared with us in the past. The search upgrade is specifically designed to work well on mobile, an area where Facebook is already considered king in terms of driving traffic.

If Facebook’s new search function works well, more of its users might be inclined to search there rather than heading to Google, especially on their phones. And that would give Facebook an opening to take a run at Google’s dominance in search. 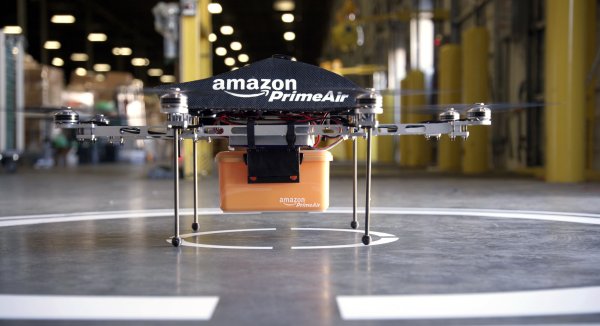 Amazon Threatens To Move Its Drone Research Overseas
Next Up: Editor's Pick