Cleveland Cavaliers forward LeBron James warms up before an NBA basketball game against the Brooklyn Nets at the Barclays Center on Dec. 8, 2014, in New York.
Kathy Willens—AP
By Nolan Feeney

A group of NBA players on Monday night became the latest to wear “I Can’t Breathe” shirts in solidarity with protesters rallying nationwide in the wake of last week’s Eric Garner grand jury announcement.

LeBron James and Kyrie Irving of the Cleveland Cavaliers sported the shirts during warm-ups, as did Jarrett Jack and Kevin Garnett of the Brooklyn Nets, CBS Sports reports. Demonstrators gathered to chant the phrase outside the Barclays Center in Brooklyn — where royal couple Prince William and Kate were attending the same game — marking the city’s sixth night of protest after a grand jury announced the officer involved in Garner’s death would not be indicted.

“I can’t breathe” were Garner’s final words in July after an NYPD officer placed him in a chokehold during an altercation on Staten Island. The phrase has since become a rallying cry for protesters upset about police brutality, especially involving white officers and unarmed black men, and particularly after the Ferguson, Mo., protests following the August police shooting of Michael Brown. A grand jury recently decided not to indict officer Darren Wilson in the teen’s shooting, igniting a night of violence in the St. Louis suburb.

After Chicago Bulls player Derrick Rose wore a similar shirt earlier this week, James said he “loved it” and was looking for one of his own. 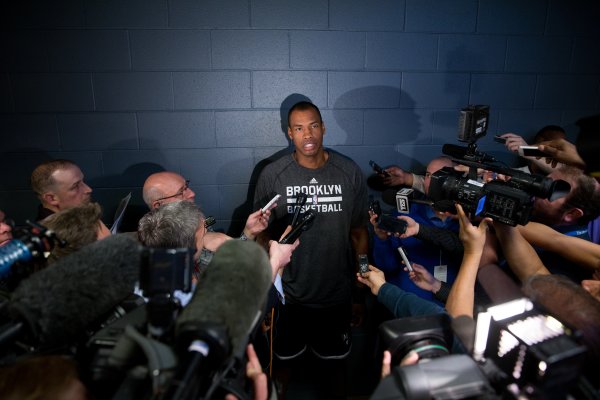 Jason Collins to Retire From NBA
Next Up: Editor's Pick