Execution Set for Man Whose Drunk Lawyer Botched His Defense

Convicted murderer Robert Wayne Holsey who is scheduled to be executed on Dec. 9, 2014.
Georgia Department of Corrections/AP

In 1997, Andy Prince’s life was in a downward spiral. The Georgia attorney was drinking a quart of vodka a night. He stole $100,000 from a client. He was arrested for disorderly conduct after threatening to shoot his neighbors. But none of that prevented him from representing Robert Wayne Holsey, a Georgia man convicted of shooting a deputy sheriff and scheduled to die this week thanks to what Holsey’s current lawyers describe as unthinkable and almost criminally poor legal representation.

On Dec. 17, 1995, Holsey shot and killed Baldwin County Sheriff’s Deputy Will Robinson in Milledgeville, Ga., after the officer pulled Holsey over for a suspected robbery. At the time, Georgia had no public defender office, leaving it up to judges to appoint a lawyer, often resorting to attorneys they knew personally. In this case, Prince was chosen to defend Holsey.

“When [Prince] took on Holsey’s case, he was in a lot of trouble,” said attorney Brian Kammer, the director of the Georgia Resource Center who is currently representing Holsey. “He was barely able to represent him. He was a chronic heavy drinker, an alcoholic. And it impacted his performance.”

Kammer says that in Holsey’s sentencing phase, Prince barely prepared the basis for why his client should be spared the death sentence. At the time, Holsey’s IQ was about 70, meaning by some standards he was intellectually disabled. Prince provided little evidence in court to bolster that defense and largely failed to provide the jury with information about Holsey’s childhood, which was rife with abuse and could have persuaded jurors to spare his life. A jury sentenced Holsey to death in 1997.

In the months and years following the trial, Prince was disbarred, sentenced to 10 years for stealing client money and later testified that he shouldn’t have been representing Holsey in the first place.

Yet the death sentence remains. While Holsey is set to die by lethal injection on Tuesday, his lawyers are working to halt his execution. On Monday, Kammer presented Holsey’s case to Georgia’s five-member clemency board, arguing that Georgia’s standard for determining intellectual disability is unconstitutional, a strict standard that requires proof beyond a reasonable doubt. Earlier this year, the Supreme Court ruled in Hall v. Florida that it was unconstitutional to automatically prohibit anyone with an IQ of 70 or above from being considered mentally disabled. The Florida law initially had a strict cutoff that made those with an IQ of 70 or above eligible for the death penalty.

The parole panel, however, denied clemency on Monday, and the Georgia Supreme Court decided against a stay of execution in a 5-2 vote on Tuesday. Holsey’s lawyers have presented a last-minute appeal to the Supreme Court to halt the execution, scheduled for 7 p.m. Tuesday. 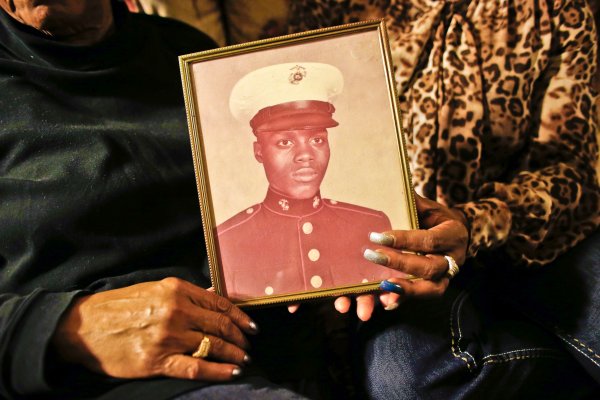 Officer Charged in Prison Death
Next Up: Editor's Pick