Russian President Vladimir Putin apparently cut out a blistering critique of Ukrainian authorities in a speech to human-rights advocates last week, as he seeks to carve out a peace deal with his country’s neighbor.

In a draft prepared by Putin’s speechwriters and obtained by TIME, the President was set to accuse Ukrainian authorities of the “mass destruction of their own citizens” during their ongoing conflict with Moscow-backed separatist rebels. But at the last moment, Putin appears to have dropped that line. The speech, as he delivered it on Dec. 5, made no mention of Ukraine whatsoever.

Reached by TIME on Monday, Putin’s spokesman Dmitri Peskov declined to comment on why the President had omitted this entire section when he delivered the speech in the Kremlin throne room that afternoon. Asked whether the change signaled a shift in Putin’s position on Ukraine, Peskov said, “No, absolutely not.”

But Russia’s position on the Ukraine conflict had already softened ahead of the next round of peace talks to be held later this week. Those talks, which will involve representatives of Russia, Ukraine and the separatists who control large portions of eastern Ukraine, as well as European mediators, will provide all sides with the best chance they’ve had in months to reach a lasting cease-fire in the eight-month-old conflict, which has already claimed more than 4,000 lives. (The date for the talks, initially set for Dec. 9, could be delayed by several days at the requests of the separatist leaders, who have asked for more time to prepare.)

Ahead of those negotiations, Putin has appeared to take a more conciliatory approach, as Russia faces immense political and economic pressure from the West to call off its support for the Ukrainian separatists. Three days before the talks were due to commence in Minsk, French President François Hollande made a surprise visit to Moscow, and Putin took the unusual step of meeting Hollande at the airport rather than having the French leader come to him, as diplomatic protocol would normally require.

When the two Presidents sat down on Saturday at Vnukovo airport for two hours of discussions on Ukraine, Putin said, “We need to resolve” the conflict and the rift it has caused between Russia and the West. Following the closed-door meeting, Putin told reporters that Russia respects Ukraine’s territorial integrity and wants to see it restored. Hollande then spoke with his German counterpart, Angela Merkel, about the “prospects for progress that have emerged” in relations with Russia.

But Putin’s last-minute redaction of the speech on Friday is perhaps the clearest sign yet of a change in rhetoric. He has tended throughout the conflict in Ukraine not to miss an opportunity to denounce the Ukrainian authorities for violating the rights of ethnic Russians, and Friday’s meeting with rights advocates in the Kremlin seemed like an ideal venue to trot out those claims once more.

According to the copy of the draft speech distributed at the Kremlin press center on Friday, Putin was meant to tell his audience that, “Neither international acts nor the structures meant to defend human rights have been able to stop the Ukrainian authorities’ mass destruction of their own citizens. Despite the fact that international observers are present in Ukraine, people are unable to stop the violation of their most basic right, the right to life.”

Gleb Pavlovsky, a former Kremlin adviser and political consultant, says the redaction appears to be part of a broader shift in Russia’s messaging. “The turn on the Ukraine issue is clear, even obvious,” he says. “Putin now wants to strengthen the message of friendliness, and the Kremlin is trying in various ways to turn down the heat on the Ukrainian issue.”

Russian state television networks, for instance, have gradually stopped labeling the Ukrainian government “fascist” in their reports, and on Saturday, Russian Foreign Minister Sergei Lavrov referred to the separatist-controlled regions of eastern Ukraine as an “open boil” on the body of the country, that needed to heal. Even a month ago it would have been hard to imagine such language coming from senior Kremlin officials, who have doggedly supported the separatists ever since their war against Ukraine began in April. “But now Moscow is trying to distance itself from them,” says Pavlovsky.

One of Putin’s imagemakers from the start of his presidency until 2011, Pavlovsky says it is not rare for the President to make last-minute changes to the texts that his speechwriters prepare. And he would almost certainly have approved the original version denouncing rights violations in Ukraine, Pavlovsky says. “Otherwise it would not have been there. But at the last minute he apparently decided that it’s not appropriate.”

The reason seems to be the troubling state of Russia’s economy. Over the past nine months, the U.S. and its allies have imposed several rounds of sanctions against Russia to force a change in the Kremlin’s interventionist policies in Ukraine, and those sanctions have managed to inflict substantial pain on Russian elites and state-connected firms. At the same time, a sharp drop in the price of oil, Russia’s most important export, has decimated federal coffers and the national currency, which has lost about 40% of its value against the dollar since the start of the year.

But a sudden change of course on Ukraine could damage the Russian President, Pavlovsky warns. The Kremlin’s propaganda channels have spent months stirring up public support for the separatist cause, and the President could see a drop in his sky-high approval if he is seen as submitting to Western pressure at this stage in the conflict, he says. “They don’t want the public to notice this shift.”

Read next: TIME Unveils Finalists for 2014 Person of the Year 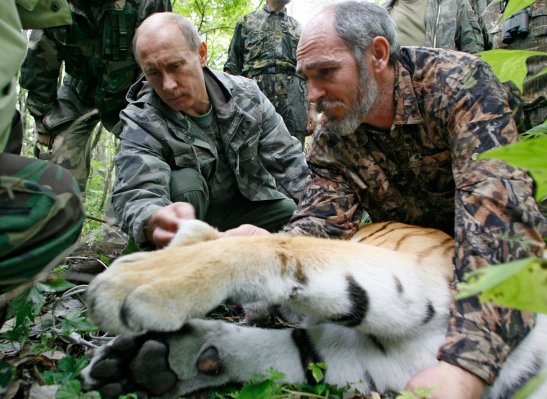 Putin's Tigers Go On Killing Spree in China
Next Up: Editor's Pick