Indian Prime Minister Narendra Modi, who entered office this year on the promise of reviving the country’s economy, is the winner of this year’s reader poll for TIME Person of the Year.

In the final tally, Modi received more than 16% of the almost 5 million votes cast. Protesters who took to the streets in Ferguson, Mo., after the police shooting of an unarmed black teenager finished second with 9%. Hong Kong protest leader Joshua Wong, Nobel Peace Prize-winner Malala Yousafzai and the doctors and nurses treating Ebola rounded out the top five.

A majority of votes, 60%, came from desktop computers. Just over 35% came from mobile devices, and 4.5% of readers voted on tablets.

The choice of the TIME Person of the Year is made by TIME editors and will be announced Wednesday.

A strong showing of readers from India helped drive Modi’s first-place finish. More people from the country voted than from any other country, with the exception of the United States. Readers from more than 225 countries in total participated, with U.S. votes leading the pack at 37%, followed by India at 17% and Russia at 12%. Last year, readers from Egypt helped lift General Abdul Fattah al-Sisi in the poll.

Modi, who leads the Hindu nationalist Bharatiya Janata Party, became Prime Minister in May after securing a landslide victory on a platform of rebooting India’s stalling economy. But his detractors have questioned his past record, citing the bloody sectarian rioting that took place in the western Indian state of Gujarat in 2002, when Modi was chief minister. More than 1,000 people died in the violence, most of whom were Muslim.

TIME managing editor Nancy Gibbs will announce the Person of the Year on NBC’s Today show on Wednesday morning, when it will also be shared on Twitter and Facebook. 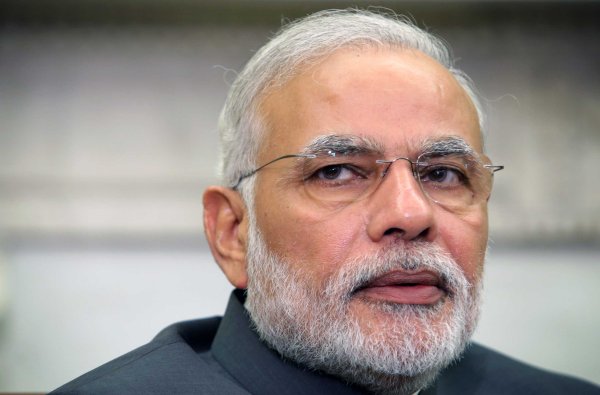 Ferguson Protesters Fall in Person of the Year Poll
Next Up: Editor's Pick