Demonstrators walk together during a protest December 3, 2014 in New York. Protests began after a Grand Jury decided to not indict officer Daniel Pantaleo. Eric Garner died after being put in a chokehold by Pantaleo on July 17, 2014.
Yana Paskova--Getty Images
Ideas
By Victor Luckerson
Luckerson is a journalist in Tulsa who is writing a book about the city's Greenwood district, and a biweekly newsletter about neglected black history called Run It Back

My parents sent me to an all-white elementary school when I was 4. I speak and think differently than them because of it. This is a small, common tragedy of black life that we don’t talk about: the best way for me to find success in my own country was to be immersed in a culture entirely different from my parents’ and adopt it as my own. But that experience taught me lessons that I now find intuitive–how to find common ground with different people, how to come off as non-threatening to others, how to chalk up racist statements to a misunderstanding. You could probably label me clean and articulate, like my President.

There are a lot of black people like me now who grew up straddling two different racial worlds. Blackish, the only comedy on broadcast TV featuring a prominent African American cast, is centered on this increasingly prevalent concept of black identity. I don’t want to paint my experience as some painful upbringing. I had a big, loving family and, eventually, great friends of all races. But I fear some people are learning the wrong lessons when they meet black people like me–that I am somehow more acceptable or less problematic than other black folks. That Mike Brown, Eric Garner and Trayvon Martin should have behaved exactly like me to avoid being killed.

This bifurcation of black people, particularly black men, into good and bad categories has been going on since the days of house and field slaves. Chris Rock articulated the modern version of it in a classic ‘90s standup bit that expressed some of the unsaid thoughts of the rising black middle class (Rock has since retired the rant because he thought it gave racists too much ammunition). What’s worrying now is that a lot of white people know and like just enough black people to absolve themselves of discriminatory thoughts or actions. No one “hates” black people anymore—just the “thugs” like Brown, Martin and Garner, who were not polite when a person with authority said they should be.

When people argue that Mike Brown being high and stealing cigarillos or Eric Garner arguing with the police led inevitably to their deaths, they’re creating a cultural threshold past which a black person’s life becomes less valuable. And when they do that, they are damning all of us.

Some people are reticent to show their frustration and anger over the Brown and Garner deaths because these victims, like all humans, have flaws. But it’s time to stop searching for martyrs or angels—just mourn for people whose lives intrinsically have value. That is reason enough to be upset about how these recent deaths have been handled by the justice system.

The older I get, the more I think about that decision to send me to a white school. How different would my life be if I had not learned to navigate that world at such an early age? For blacks who’ve grown up in communities segregated in the opposite way, it’s not as easy. Learning to deal well with white people can help you get far in life. But it shouldn’t be a requirement for holding onto your life. That is the era my parents grew up in, and I don’t want it to be mine too. 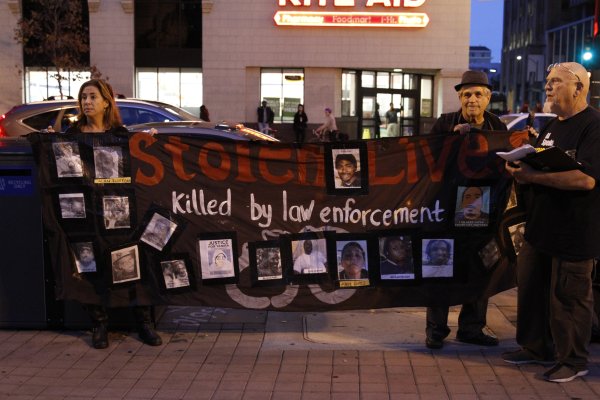 Corporations Are People But People of Color Are Not
Next Up: Editor's Pick