Corporations Are People But People of Color Are Not

Protestors gather to protest after two grand juries decided not to indict the police officers involved in the deaths of Michael Brown in Ferguson, MO. and Eric Garner in New York, NY, on December 04, 2014 in Oakland, CA.
Anadolu Agency—Getty Images
Ideas

If it wasn’t clear before, it is abundantly clear now. We are in the midst of a deeply sinful and systemically broken system, and the collusion of police and capitalist structures has prevented meaningful criminal justice reform from happening.

When the announcement came down in Ferguson that there would be no trial for Darren Wilson, the white police officer who shot and killed black teenager Michael Brown, the police set up camp in a strip mall. Target, ironically, was safe. Thursday night in New York, hundreds of police lined the streets with barricades and batons not to protect the people protesting the non-indictment of the white police officer whose chokehold led to Eric Garner’s death, but to protect the Christmas tree at Rockefeller Center–a phalanx standing guard over one of the high holy symbols of capitalism.

“I can’t breathe” could very well have been uttered by Jesus on the cross—Jesus Christ, an oppressed minority under the most powerful government on the planet who was legally put to death by the state.

But at least Jesus had a trial.

The impunity with which police officers can continue to kill some of the most vulnerable members of society, the latest being Garner, is terrifying. May this be our moment of repentance for a sin that has plagued our nation for over 400 years.

At its best, religion teaches us to recognize the humanity in each and every one of us. At its worst, we learn to see people as less than human—as objects or property.

In 1857, in a case first brought to court just a few miles from present-day Ferguson, United States Chief Justice Roger Brooke Taney found that Dred Scott, as a black man, wasn’t a man at all. Blacks, he wrote, are legally “beings of an inferior order…and so far inferior that they had no rights which the white man was bound to respect.”

In his grand jury testimony, Wilson called Brown a “demon,” referring to him not as a “he” but as an “it.”

This can be a moment for the scales to fall from the eyes to expose the white idolatry, white privilege, and white brutality that holds our country captive, where white people—myself included—begin to see what people of color see all the time: a criminal justice system that views them not as people, but as objects to be beaten and bullied. And killed without consequence.

The highest ideals of our faith insist we never demonize anybody, much less kill that demonized other. We worship a God who made all people in God’s likeness and bestowed each human with the mark of the divine.

How far away are we from the steps of the courthouse that declared to Dred Scott and America that people of color are property and objects, not people?

We are startlingly close to that dreadful past. Michael Brown and Eric Garner are treated like objects while Christmas trees and Target stores are treated like human beings that need protections and rights. In today’s society it seems that corporations are people but people of color are not.

So now we march. Now is the time to build a sturdy and empowering infrastructure for a social movement.

The degradation and demeaning of black and brown life must stop.

Rev. Dr. Serene Jones is President of Union Theological Seminary in the City of New York, where she also holds the Johnston Family Chair in Religion and Democracy. She is Vice President of the American Academy of Religion, an ordained minister in the United Church of Christ and the Christian Church (Disciples of Christ) and author of Trauma and Grace: Theology in a Ruptured World. 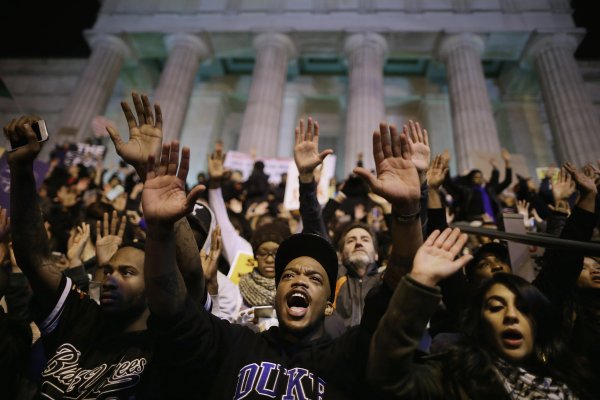 How 'Hands Up, Don't Shoot' Could Start a Real Revolution
Next Up: Editor's Pick