Jon Stewart Imagines Life if He Ended Up With Angelina Jolie

It’s been a long time since Jon Stewart worked with Angelina Jolie on a 1998 film called Playing by Heart, but the Oscar winner left a lasting impression on him.

“Ever since I met you about 20 years ago on set, I thought, ‘This person has talent coming out of everywhere,’ ” Stewart told the actress and director, who stopped by The Daily Show on Thursday. “You meet certain people and you go, ‘This person embodies something different, special.’ I’ve always thought that about you.”

In fact, he even came up with a Brangelina-like name for himself and Jolie, 39.

“If you’d ended up with me instead of Brad Pitt, our portmanteau – Stewart and Jolie – would have been ‘Stolie,’ ” he told the newlywed. “We could have been a vodka brand!”

Stewart, 52, was also full of praise for Jolie’s new film, Unbroken (out Dec. 25), which marks her second outing as a director. He described the big-budget film about Louis Zamperini, an Olympic runner and World War II prisoner of war who survived 47 days lost at sea, as “epic” and asked his former rom-com costar if she felt daunted by undertaking a film of such scope.

“It took me off-guard,” Jolie admitted. “I remember waking up in the middle of the night thinking, ‘I don’t know how to film a shark attack.’ ”

“You convince the studio, you say, ‘You should give me this job, I know exactly what I’m doing. I’m so sure of it.’ And then you get the job and you go, ‘Oh my, I’m not sure that I do.’ So every day was a challenge,” she added.

Jolie, who directed In the Land of Blood and Honey in 2011, a film she also wrote, told Stewart that she enjoyed the “huge responsibility” of helming a film.

“I love directing,” Jolie said. “You’re there from the beginning until the end, shepherding every tiny detail.”

When Stewart asked if her interest in directing came from acting in films where she felt that maybe the director could have gone a different way with a scene, Jolie admitted that there were a few of her movies that she hadn’t seen “because I couldn’t sit through them.”

That prompted an adoring Stewart to lean forward, and as they batted eyes at each other he said, “Do you want to talk to me about them, because I’ve seen them all.”

But when Jolie returned the compliment and told the host that she and her husband watched The Daily Show at home, Stewart’s interest in her quickly evaporated.

What does the former PEOPLE Sexiest Man Alive wear when he watches the show, Stewart wanted to know. Just pajama pants and no top?

“Sometimes,” Jolie said with a smile. 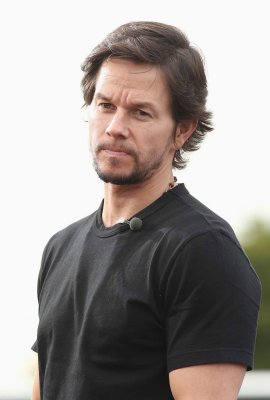 Wahlberg Seeks a Pardon for His 1988 Assault Conviction
Next Up: Editor's Pick