President Obama congratulates Ashton Carter after announcing his intention to nominate him to be the next defense secretary Friday.
BRENDAN SMIALOWSKI / AFP / Getty Images
By Mark Thompson

Army Sergeant Chuck Hagel knew how to toss a hand grenade when he served in Vietnam in 1968. Friday he made clear he still knows how to do it, declining to attend the White House nomination announcement of his successor, Ashton Carter, after the Administration had let it be known he’d be there.

It’s the latest in a string of snafus that has marred the transition between President Obama’s third and fourth Defense secretaries.

In a nation engaged in combat in Afghanistan, Iraq and Syria, such theatrics might be viewed by outsiders as mere distraction. But inside the Pentagon—and in ruling circles around the world—such drama is often seen as a national-security team fumbling the ball. If they can’t handle a handoff, the thinking goes, how can they run a war?

But the President dragged Hagel into the announcement, anyway. “A year ago, when Ash Carter completed his tenure as deputy secretary of defense, Secretary Hagel took to the podium in Ash’s farewell ceremony and looked out at the audience of our civilian and military leaders, and he said, ‘I’ve known Ash Carter for many years. All of us here today have benefited from Ash’s hard work, his friendship, from his inspiration, from his leadership.’ And Chuck then went on to express his gratitude to his partner for ‘what Ash has done for this country and will continue to do in many ways.’”

“Couldn’t have said it better myself,” Obama added.

Hagel actually may have turned gun shy following his Thursday press conference at the Pentagon, where he rolled out the Defense Department’s latest sexual-assault report. After working for a year to reduce sexual assaults in the military—and actually having some good news to share on the subject—reporters only asked him about his impending departure, and the reasons for it.

Both Hagel and Obama have stressed that each felt it was simply time for a change. But White House officials made clear they were unhappy with his performance, which has driven Hagel loyalists bonkers. “This was a mutual decision based on the discussions that we had,” Hagel said Thursday of their discussions. “I don’t think there’s ever one overriding or defining decision in situations like this, unless there’s some obvious issue, and there wasn’t between either one of us.”

Yet Hagel put Obama in a tough spot by submitting his resignation Nov. 24, as soon as it became clear he had lost the President’s confidence. That put the White House in the awkward spot of hailing Hagel’s impending departure amid wartime without his replacement standing alongside.

So perhaps it was only fitting 11 days later—after background investigations into Carter finally wrapped up—that Hagel was the missing man this time around. 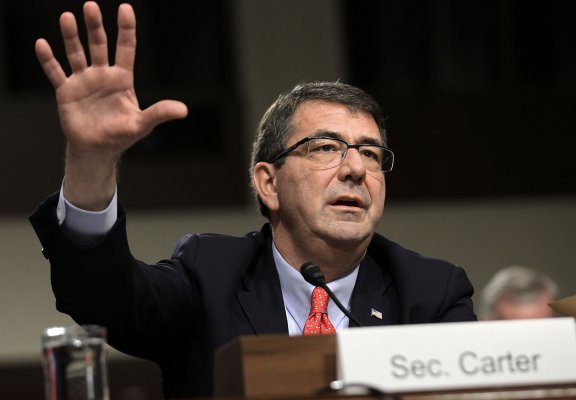 Obama Announces Ash Carter as Next Pentagon Chief
Next Up: Editor's Pick