Sri Lankan asylum seekers sent back by Australia queue to enter the magistrate's court in the southern port district of Galle on July 8, 2014.
Lakruwan Wanniarachchi —AFP/Getty Images
By Helen Regan

Australia lawmakers approved a bill Thursday that will allow asylum seekers to live and work in the country using temporary protection visas.

Refugees who are granted the temporary visa can stay in Australia for three to five years but are denied permanent residency, the BBC reports.

Currently, asylum seekers arriving to Australia by boat are held in offshore detention centers, where conditions have been criticized by human rights groups. Under the new legislation, the number of refugees allowed to work in Australia will rise by 7,500 from 13,750 by 2018.

“We always said that three things were necessary to stop the boats — offshore processing, turning boats around and temporary protection visas,” he said. “Last night the final piece of policy was put in place.”

Refugees using a temporary visa can live and work in the country but the government has the power to deport them back to their home country if it deems conditions there have improved.

Paul Power, chief executive of the Refugee Council of Australia, criticized the legislation as a “shattering blow for asylum seekers who face the grave risk of being returned to danger,” reports the BBC.

Immigration Minister Scott Morrison made several concessions to get the bill passed, including that children will no longer be detained on Christmas Island, an Australian territory in the Indian Ocean, for offshore processing.

The bill became law from Friday. 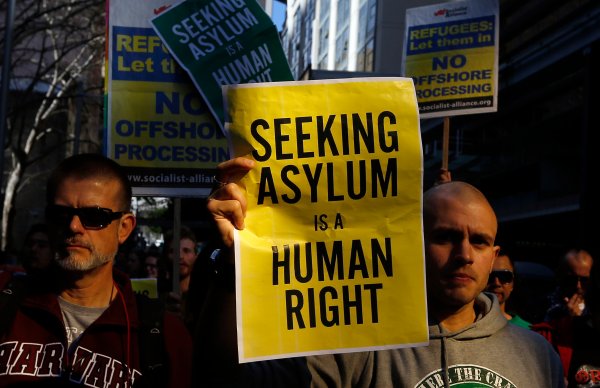 Asylum Seekers Want Obama to Save Them From Australian-Run Internment Camps
Next Up: Editor's Pick