A chimpanzee holds a lettuce at the zoo in Abidjan, Ivory Coast, on June 12, 2014
Sia Kambou—AFP/Getty Images
By Elizabeth Barber

A chimpanzee does not have legal personhood and is not entitled to human rights, a New York appeals court has decided.

The three-judge Appellate Division panel ruled unanimously on Thursday that the owner of Tommy, a chimpanzee, is not obligated to release him from what an animal-rights’ group has called unlawful detention.

The Nonhuman Rights Project had sought Tommy’s freedom from a cage in upstate New York, arguing that the animal’s living conditions, selected for him by his owner, equated to unlawful solitary confinement. The group, which planned to move Tommy to a sanctuary, did not seek to have the chimpanzee declared a human, but to obtain legal personhood, a status that would entitle him to a writ of habeas corpus and merit his release.

A trial level court had in October denied the Nonhuman Rights Project’s effort, when the group’s lawyer, Steven Wise, argued that Tommy, 26, is best compared to a human child who “can understand that he does not want to be imprisoned for his life in a cage,” but, unlike a human adult, cannot be held legally responsible for his actions. The judge, Michael Lynch, had noted that legal personhood comes with “responsibilities” and it would be unwise “to foist any responsibilities on this chimpanzee.”

In its decision, the appeals court reiterated the lower court’s findings that chimpanzees, though intelligent, are unfit take on the legal implications of personhood, ruling that, “unlike human beings, chimpanzees cannot bear any legal duties, submit to societal responsibilities or be held legally accountable for their actions.”

“In our view, it is this incapability to bear any legal responsibilities and societal duties that renders it inappropriate to confer upon chimpanzees the legal rights — such as the fundamental right to liberty protected by the writ of habeas corpus — that have been afforded to human beings,” reads the decision.

Tommy’s owner, Patrick Lavery, told the Guardian that he finds the Nonhuman Rights Project’s argument for his pet’s legal personhood “ridiculous.” Lavery, who has not attended any of the proceedings, called the chimpanzee’s living quarters “an excellent home” that includes a TV and in which the chimpanzee is “happy.”

The Nonhuman Rights Project did not allege that Lavery had violated any state or local laws in keeping Tommy as a pet. The appeals court concluded that if the group believes that current legal protections for animal welfare are insufficient, they should seek improved legislation on the issue, not legal personhood. 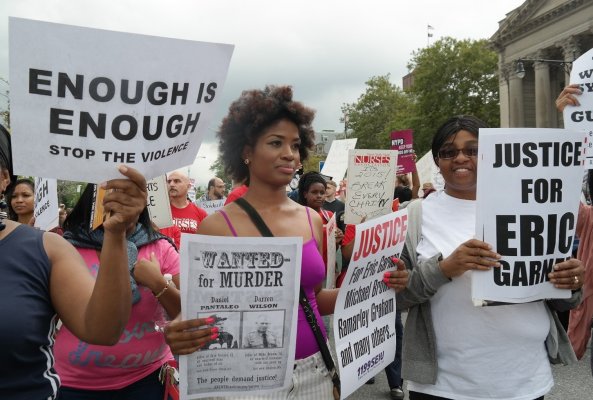 Decision in Chokehold Case Imminent
Next Up: Editor's Pick