The Philippines Is Facing a Terrifying Typhoon Once Again

Residents with their belongings wait for a government vehicle to bring them to the evacuation center in Tacloban city, central Philippines, on Dec. 4, 2014
Reuters
By Per Liljas

Thousands of people are being evacuated from coastal areas of the eastern and central Philippines as Typhoon Hagupit approaches.

The massive storm, called Typhoon Ruby in the Philippines, is packing maximum sustained one-minute wind speeds of 257 km/h (160 m.p.h.) and threatens the very regions that were devastated by Supertyphoon Haiyan just 13 months ago.

The new storm has the potential to cause massive damage with storm surges, heavy rainfall and landslides, meteorologists say. That could lay waste to areas still recovering from last year’s catastrophic storm.

At least 6,300 people died, and 4 million were displaced, when Haiyan (known in the Philippines as Yolanda) crashed into the Visayas with wind speeds exceeding 300 km/h last November. Some 25,000 people in the area are still living in temporary shelters and tents.

Forecasters previously believed that Hagupit would veer north toward Japan, but on Thursday it appeared increasingly likely that it would track through the central Philippines. Hagupit’s intensity has decreased, but the U.S. military’s Joint Typhoon Warning Center still grades it as a Category 5 hurricane — the highest level.

The Philippines’ weather agency has issued public storm signals for 21 geographic areas, mainly along the eastern seaboard, spanning from Luzon in the north to Mindanao in the south. Schools and government offices have closed and people are lining up outside shops and gas stations to stock up on supplies.

“There’s extreme nervousness and anticipation,” says Renee Lambert, who heads the Catholic Relief Services (CRS) office in Tacloban, provincial capital of Eastern Visayas. “However, the memory of what happened during Haiyan has also increased people’s awareness and preparedness.”

Lambert says that people started preparing in earnest on Thursday, and that CRS and other relief organizations are working in close coordination with the local government, schools, churches and communities to find safe shelters.

“There’s no movement of the air at all at the moment, but it’s really heavy and humid,” she says. “People who survived Haiyan say it felt just like this in the days before Haiyan struck.”

Hagupit is expected to make landfall Saturday evening and then move extremely slowly over rugged island terrain toward the capital Manila, increasing the risk of heavy rainfall, landslides and flash floods.

Most Popular on TIME
1
China Appears to Have Tamed a Second Wave of Coronavirus
2
How the U.S. and U.K. Failed Their Coronavirus Responses
3
U.S. Customs Seize Human Hair Weaves From Chinese Prison Camps 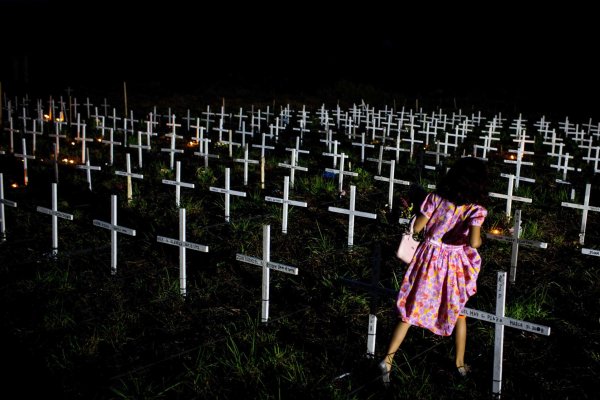