Here's What a Chokehold Actually Is

On Wednesday, a grand jury in New York decided not to indict an NYPD officer in the death of an unarmed black man during his arrest for selling loose cigarettes in his Staten Island neighborhood.

Video footage of the incident shows Eric Garner being subdued by several officers, with NYPD Officer Daniel Pantaleo apparently wrapping his forearm around the man’s neck — a move that has widely been described as a “chokehold.” Garner can be heard in the video saying “I can’t breathe.”

In grand jury testimony, Pantaleo says he merely used a maneuver that had been taught to him in police academy. According to the New York Times, Pantaleo says he hooked his arm under one of Garner’s arms as he wrapped his other arm around Garner’s body.

But was it a chokehold? Here’s the precise language the NYPD Patrol Guide uses to describe the maneuver, which it has banned for two decades:

That definition is generally the same one used in martial arts or other combat sports.

Despite the ban, chokeholds are still widely used by police officers in New York City. According to the city’s Civilian Complaint Review Board, dozens of chokehold complaints are filed every year. So far this year, more than 100 have been filed. The high water mark was in 2012, when about 250 complaints were lodged. 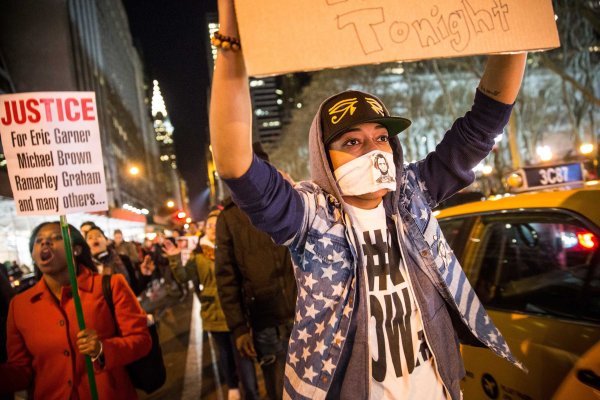 See Protesters Take to the Streets After the Eric Garner Grand Jury Decision
Next Up: Editor's Pick