No Charges for Officer Who Put Eric Garner in Deadly Chokehold

By Maya Rhodan and Charlotte Alter

The announcement Wednesday that a grand jury declined to indict a New York police officer in the chokehold-related death of a Staten Island man prompted protests around the city and led a number of officials to again acknowledge Americans’ frustrations over community-police relations.

The grand jury decided there was not enough evidence to file charges against officer Daniel Pantaleo in the death of Eric Garner, following an altercation with a group of officers on July 17 that was videotaped by one of the victim’s friends. Officers suspected Garner of selling untaxed cigarettes and attempted to detain him, which Garner protested.

The footage depicts several officers forcing Garner, 43, to the ground while Pantaleo puts him in what appears to be a chokehold, an aggressive move that is banned by the city’s police department. In the video, which went viral, Garner can be heard repeatedly saying, “I can’t breathe.” That phrase has been frequently invoked at protests around the country. A city medical examiner later ruled Garner’s death a homicide caused by “compression of the neck.” Although several officers were involved in Garner’s arrest, Panteleo was the only one who faced a potential indictment in the fatal encounter.

President Barack Obama later weighed in from Washington, among several cities where demonstrations would pop up on split-screen news segments next to analysts going over the fallout. “When anybody in this country is not being treated equally under the law, that is a problem and it’s my job as President to help solve it,” he said.

The grand jury’s decision came just over a week after the announcement that Darren Wilson, a white police officer in Ferguson, Mo., would not be indicted in the August shooting death of unarmed black teenager Michael Brown. That news ignited a night of looting, arson and riots in the St. Louis suburb, and touched off demonstrations from New York to Los Angeles.

“It’s a very painful day for many New Yorkers” Mayor Bill de Blasio said in an afternoon news conference. “No family should have to go through what the Garner family went through.”

A small but fierce crowd gathered at Union Square soon after the announcement was made public. Some demonstrators led chants of “Indict! Convict!” and “The whole damn system is going to hell!” Others had tears streaming down their faces and held up their smartphones to capture the protest. Many said they were not shocked to see jurors decline to indict the officer.

“No, when you’re black, you can’t be surprised,” said Omar Holmon, 29, a writer and performer. “The worst part is feeling numb to it.”

The march snowballed in size as it snaked north to Rockefeller Center, where the annual Christmas tree lighting was due to take place, causing the protestors to mix in with tourists. Chants of “Am I next?” were punctuated with calls of “Don’t ruin my Christmas!” and frantic gesturing of out-of-towners lost in the crowd.

“I’m tired of seeing people who look like me get killed,” Holmon added, holding back tears. “I want justice.”

Just as they did after Fergson, a number of elected officials spoke out Wednesday in the wake of the announcement.

New York Sen. Chuck Schumer tweeted that the Justice Department needed to launch a federal investigation into Garner’s death “as soon as possible.” And Sen. Kirsten Gillibrand called the fatal incident “a tragedy that demands accountability.”

MORE: Behind the Video of Eric Garner’s Deadly Confrontation With New York Police

Local, state and federal officials have received rampant condemnation over the police-involved deaths this year of unarmed black men like Brown and Garner, as well as the Cleveland police shooting of 12-year-old Tamir Rice. Obama recently announced the launch of a national task force that would aim to improve trust between police departments and communities of color. In addition, he said a three-year, $263 million package would expand the use of body cameras among police officers and increase their training for surplus military equipment.

The nation’s top cop also held a brief news conference Wednesday evening, saying the Justice Department would launch a civil-rights inquiry into Garner’s death. Federal prosecutors would conduct an “independent, thorough, fair and expeditious investigation,” Attorney General Eric Holder said. “His death was a great tragedy,” he added. “All lives must be valued, all lives.”

As the night went on, protestors in New York fanned out into the streets and blocked traffic as officers kept pace. At one point, a group of protestors took over a section of the West Side Highway, resulting in a handful being detained. Police said there were at least 30 arrests around Manhattan as of 10:15 p.m., local time. 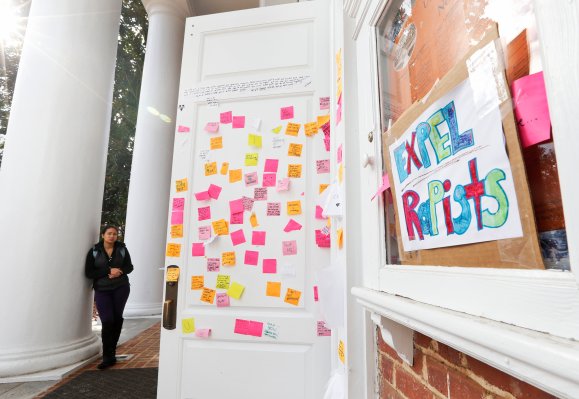 No Formal Police Investigation Yet in UVA Rape Case
Next Up: Editor's Pick