Charli XCX does not like hearing herself on the radio. This is a problem for the British pop singer because she’s been all over it lately: first crashing cars and starting fires on Icona Pop’s global smash, “I Love It,” then trashing mini-bars in luxury hotels on “Fancy,” her No. 1 hit with Australian rapper Iggy Azalea. Now, she’s riding the wave of her first Top 10 solo hit, “Boom Clap,” from The Fault in Our Stars movie. She may not be a household name — at least not yet — but her work is ubiquitous. If you tried to watch one of those songs’ videos on YouTube in the past year, there’s a good chance you had to first sit through a commercial featuring that very song.

Usually when her song starts playing, Charli XCX (born Charlotte Aitchison) changes the station. But in the back of a van on a humid day in Fort Lauderdale, Fla., after visiting a local radio station ahead of her headlining show that night, someone from her promotions team convinces her to stay and hear her new single “Break the Rules” get airplay. When the DJ instead plays her pre-recorded interview from earlier, Charli lets out a playful groan, hops out of the van and heads toward the tour bus parked behind a Best Western. The hotel was chosen for its proximity to the venue around the corner, and while one member of her team suggests it’s beneath a rising star like her, Charli throughout the day declares her love for it.

“I don’t want to feel like a celebrity,” she says, sprawled out with a fluffy pink blanket in the back of her bus. Charli’s fashion sense typically resembles all the Spice Girls rolled into one, but today she’s more like a hipster Elvira — an untamed mane of near-black hair, a black slip dress and matching boots. “I want to make music and stay in weird, trashy stripper hotels, because I find that really glamorous.” Later that night, while getting her hair and makeup done before show time, she jokes about retiring there: “I’d just be around the pool with some old-ass man, just hanging out, having sex, drinking mai tais, doing nothing. We’d have two weird iguana pets.”

At age 22, Charli XCX has managed to win both the support of pop radio and the adulation of indie-music bloggers by marching to the beat of her own drum machine. Young singers with mainstream ambitions typically don’t debut with an album of euphoric but left-field electro-pop (as she did on 2013’s critically acclaimed True Romance). They don’t give away massive hits to other artists (as she did with “I Love It”). And they certainly don’t retreat to Sweden to write punk rock-inspired albums that further eschew Top 40 conventions. On Sucker, arriving Dec. 15, Charli swaps grimy synthesizers for crunchy guitars and crackling drum beats more snarling than sweet. If True Romance was the sugar rush of falling in love, Sucker is a middle finger covered in Sour Patch dust — a reinvention of her sound and a reaffirmation of all the counter-intuitive career moves she’s made. And if her predictions are right, it will kick off a new era in the music industry.

“I can see pop music changing into something I can really run,” she says. “There’s only a few more years left of the whole plastic, overproduced, bad-lyric throwaway pop. It’s dying out because audiences are clever. Artists are running their own careers now, and that means it has to come from them. It has to come from their brain.”

Growing up just outside of London in Bishop’s Stortford, England, Charli was already a button-pusher, flirting with older high school teachers and stealing chemistry equipment for her own experiments at home. Her parents loaned her money to make her first album, 14, named for her age at the time, but the record was never commercially released. After posting the songs to Myspace, however, Charli scored invites to perform at illegal London raves, to which her parents happily provided transport. “We were the weird family at the club kid parties,” she said.

She landed a record deal at 16 and spent the next few years working on what would become True Romance. Toward the end of that period, she wrote “I Love It,” but, thinking little of the track at the time, let Swedish duo Icona Pop record it. (She’s still featured on the track.) When Charli writes songs, it’s often a synesthetic experience — she pictures colors and music video concepts. With “I Love It,” nothing sparked. The song didn’t fit with the rest of her record, and she couldn’t have told you at the time what it was about. Charli, who wrote it in a hotel room sitting next to her boyfriend at the time, didn’t even realize it could be a breakup anthem until Icona Pop said so. Her label meanwhile, urged her to keep it for herself, telling Charli she was sitting on a huge hit.

The label was right: the song’s boisterous I! Don’t! Care! hook sold more than two million copies in the U.S. and went to No. 1 in the U.K. But the label has been wrong before too. When she recorded “Fancy” with Azalea, she says her label “felt nothing.” The song later topped the Billboard Hot 100 chart for seven consecutive weeks and was the undisputed song of the summer. “She typifies this idea of the pop rebel — her whole career is rebelling,” says Vampire Weekend’s Rostam Batmanglij, who worked with Charli in Sweden and produced Sucker’s closing track, “Need Ur Luv.” “What went down with ‘I Love It’ and ‘Fancy,’ it kept her as a dark horse. That’s become part of her identity in a cool way.”

The success of “I Love It” had its downsides. She and producer Patrik Berger were inundated with requests to write replicas for other artists — all anybody wanted was to extract another “I Love It” from the pair. Feeling uninspired, she and Berger holed up in his native Stockholm, Sweden. Instead of trying to churn out more of the same, Berger showed her his punk band, Snuffed by the Yakuza, and the two banged out dozens of two-minute punk songs to vent their frustrations. They would work until 6 in the morning, wake up at 11, then work until sunrise again. “We were both tired of the machine of pop music,” she says. “We just wanted to rebel against it.”

After getting the aggression out of her system, she went back to writing pop songs — “She can write so much, she competes with her own material,” Berger says — but the punk sessions left a permanent mark. Instead of showing off new levels of maturity, the songs of Sucker revel in juvenile delinquency and testing limits. “Breaking Up” is a brutal kiss-off to a no-good boyfriend, while “Break the Rules” is an invite to a drug-fueled dance party. Charli already put out her coming-of-age record — now she just wants to have fun. “It actually takes a lot to completely let go,” she says. “You have to really trust yourself, and you really do have to lose your inhibitions. Even though the subjects might be more frivolous, Sucker is, in fact, more of a serious pop record.”

The nice thing about making your record label a ton of money — Charli and Icona Pop are labelmates, so “I Love It” was all in the family — is that your bosses tend to leave you alone afterward. Charli says she fought with her label about the direction of True Romance, but this time, everyone’s on board with the singularity of her vision. “I never get questioned on anything now,” she says. “I proved a point to my record label that I wasn’t f-cking around. I can write big pop songs, but I can A&R myself as well.”

A&R — artists and repertoire — is the label department dedicated to developing artists. When it comes to a young female pop act with plenty of potential, such development has historically meant shaping everything from her sound and her collaborators to her public image to ensure that the investment pays off. There have been numerous cases of up-and-coming artists getting stuck in label purgatory when their tastes didn’t gel with their label’s expectations (see: Charli’s pal Sky Ferreira or “212” rapper Azealia Banks).

Now that Charli has made it through to the other side, she’s ready to gloat. Sucker opens with its title track, a fuzzy electro-rock stomper that unleashes a muffled shout in place of a proper pop chorus: “F-ck you, sucker!” That evening in Fort Lauderdale, when Charli takes the stage to that song dressed like a cheerleader, she strikes a pose and flips off the crowd before starting the first verse. “That song is really important to me because it’s everything I’ve always wanted to say but have always been afraid to say,” Charli says. “I realized while I was writing the punk record and being in Stockholm I genuinely began to not care about what people thought of me and my music.”

Charli does, however, care about the rest of pop music, which she says is overdue for a sea change. Her influence is already taking shape — she’s been tapped to write for Britney Spears and Gwen Stefani, artists she grew up listening to — but she says pop’s obsession with trend-chasing and replicating past successes has, best-case scenario, another five years before listeners outright reject whoever’s phoning it in. “There are a lot of lazy songs — ‘Let’s put a trumpet in or a saxophone, and it’ll be a hit!’” she says. “It gets watered down so much so there’s no realness left in it, or feeling.” (She’s not trying to insult other artists here: “Maybe that’s not the best example,” she quickly backtracks, “because most of the songs out now with trumpets in them are actually kind of alright.”)

That’s not to say she doesn’t believe in major labels. Charli says she signed with one because she wants budgets for touring, dazzling stage shows and fabulous music videos. She wants to record all over the world and spare few expenses when it comes to her music. But she thinks pop listeners are now hungering for artists who steer their own careers in that regard — artists like Lorde, who critiqued pop’s homogeneity on her 2013 breakout hit, “Royals,” and whom Charli points to as a peer also entering the mainstream strictly on her own terms. “I’m very judgmental of the music industry,” she says. “That’s why I called it Sucker. It’s me pointing the finger and calling everyone a sucker, but at the same time, I’m really aware that I’m part of that pop circus now.”

In other words: Charli doesn’t want to sabotage pop music — she wants to reform it. She’s already plotting her next move, and it’s yet another 180. Charli says her third album will be heavily inspired by Japanese pop music and will sound like both “another planet up in the clouds” and “intensely weird and childlike.”

“If I wanted to make loads of f-cking money, I’d make the whole album with [Rihanna producers] Stargate and learn how to dance properly, and I’d kill it. It would be f-cking easy for me,” she says. “But that’s boring.”

A version of this story appears in the Dec. 15 issue of TIME. 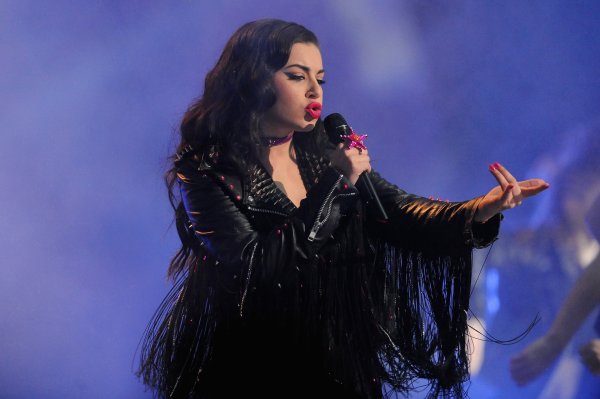 Watch Charli XCX Make a Scene at a Bowling Alley in 'Breaking Up' Video
Next Up: Editor's Pick