Should I Eat Greek Yogurt?

Have you heard of Greek yogurt? Of course you have. The stuff is so popular that if Greek yogurt were a band, it wouldn’t be cool to like them anymore. But these experts are still huge fans.

David Katz, MD, director of the Yale University Prevention Research Center, eats it every day for breakfast, topped with berries and whole-grain cereal. That’s because it’s filled with calcium, potassium and, of course, lots of protein—which every expert we spoke to mentioned. Just six ounces of plain, fat-free Greek yogurt has 34% of your daily value. That’s way more than you’d get from the thin, watery version marketed to dieters.

Thicker yogurt, strained to remove the whey, has been part of many cultures’ cuisines for ages. Without that whey weighting it down, Greek yogurt comes with less sugar than regular yogurt, as long as you stick with the plain stuff, says Shivani Sahni, PhD, an instructor at Harvard Medical School.

MORE: The Mediterranean Diet Has Been Linked To A Longer Life—Again

Greek yogurt fills you up with protein, not calories—a container of non-fat only has about 100. That means, at least in theory, you won’t be inclined to eat as much nutrient-poor food. “Given that protein is considered the most satiating macronutrient per calorie, a high intake of Greek yogurt may help prevent weight gain,” says Mario Kratz, PhD, research associate professor in epidemiology at University of Washington.

The diet-worthy dairy is also versatile, and it stands up just as well in your chip dip as in Dr. Katz’s morning granola.

There’s just one caveat. While Greek yogurt is a nutrition powerhouse, according to our experts, its probiotic promises may be overhyped. “While it is a probiotic, the bacteria don’t hang around in your gut,” says Jack Gilbert, PhD, a microbiologist at the U.S. Department of Energy’s Argonne National Laboratory and a researcher of all things bacteria. “If you are healthy they have very little impact on your health. But if you have a disrupted microbiome, such as when you have taken an antibiotic, then eating Greek yogurt might be good, filling up the real estate, and stopping pathogens from taking over.”

Before it gets to your gut, though, let Greek yogurt colonize your grocery list—right at the very top. 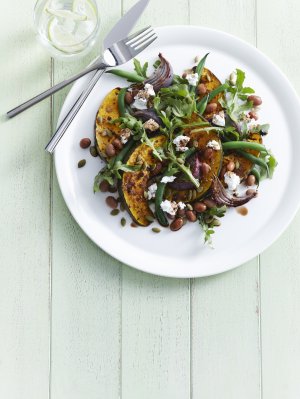 6 Steps to Reset Your Diet After a Holiday Binge
Next Up: Editor's Pick