A man purported to be the reclusive ISIS leader Abu Bakr al-Baghdadi.
Reuters
By Vivienne Walt

In what could be one of the biggest breaks yet in the war against the Islamic State in Iraq and Greater Syria (ISIS), Lebanese officials said on Tuesday they had arrested a wife and child of ISIS leader Abu Bakr al-Baghdadi, as the two tried to cross over the Syrian border late last month using false identity documents. The Lebanese military has detained the pair and is in “coordination with foreign intelligence agencies,” according to Lebanon’s as-Safir newspaper.

If that is correct, intelligence agents from the U.S. to Iraq might have stumbled on a goldmine.

The woman, whom Iraqi and Lebanese officials identified as Saja al-Dulaimi, is not the first wife of a fugitive leader to flee her husband’s territory; the wives of Iraqi President Saddam Hussein and Libyan leader Moammar Gaddafi fled across the borders of their countries before the capture of their husbands, fearing they would be arrested or killed in the attacks on the regimes of their husbands.

But that is where the similarities end, say some experts. Saddam’s family, who now live in Amman, Jordan, and Gaddafi’s wife, who found refuge in Algiers and finally Oman, live in freedom and keep a low profile.

But Dulaimi, an Iraqi and one of Baghdadi’s three wives, could provide crucial details in custody about her husband, as the U.S. and allies wage a fierce bombing campaign to crush ISIS. With so few known facts about Baghdadi, “she is the best source of information about him and about the dynamics of ISIS that anyone has had up until now,” says Sajjan Gohel, International Security Director at the Asia Pacific Foundation in London. He added that the fact that Lebanon waited 10 days before announcing her arrest suggests that they were squeezing Dulaimi for information before letting ISIS know they had her in custody, perhaps to give the U.S. and its allies time to plan surprise operations against Baghdadi. “Until now the flow of information has been always directed by ISIS,” says Gohel.

Among the details the U.S. and Iraq might find interesting — and which Dulaimi could be well-placed to know — is where Baghdadi is now, what routes he uses to travel around ISIS-controlled territory in Syria and Iraq, and whether he was injured in an airstrike last month, as reports suggested. It was unclear on Tuesday whether the child arrested with Dulaimi was a boy or a girl. But the very fact that Dulaimi has fled Syria might suggest that ISIS is under such severe pressure, that Baghdadi has sent his loved ones to safety elsewhere, or that his wife decided herself to flee the war. Dulaimi was among 150 women prisoners the Syrian government freed last March in exchange for 13 nuns captured by Islamic militant insurgents of the al-Nusra Front.

Little is known about Dulaimi’s own role in ISIS; CNN on Tuesday quoted a Lebanese security force describing her as “a powerful figure heavily involved in ISIS.” Now, she could also find herself a valuable bargaining chip in the turmoil rocking the region, as governments and insurgent forces trade firepower and prisoners. Reuters on Tuesday quoted a Lebanese security official saying Dulaimi was “a powerful card to apply pressure” on militants, who are not directly connected to ISIS, to free 27 members of Lebanon’s security forces.

As long as Dulaimi remains in custody, however, she joins a growing number of close relatives of terrorist leaders who have paid the price for their loved ones’ actions.

Immediately after the September 11 attacks in 2001, several relatives of Osama Bin Laden fled Afghanistan, some across the border to Iran. “They stayed there for many years,” Gohel says. “The assumption is that whatever intelligence they provided was never shared with the international community.” And after U.S. Navy SEALs assassinated Bin Laden in May, 2011, in Abbottabad, Pakistan, that country arrested the al-Qaeda leader’s wives and children who lived with him there, keeping them under house arrest for a year before deporting them to Saudi Arabia.

Read next: Wife of ISIS Leader Detained in Lebanon 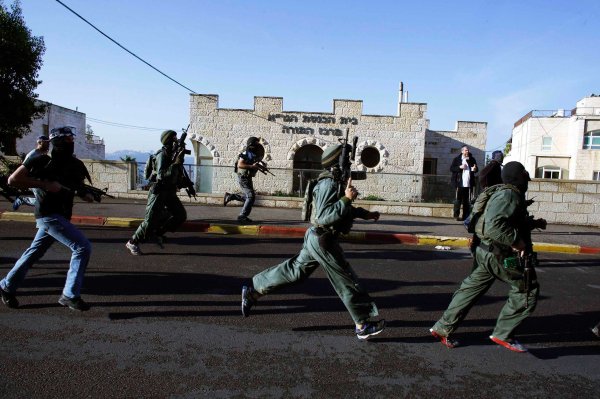