Following a long, hard weekend that included much “shade” and reportedly even more prayer, Elizabeth Lauten has finally done the right thing and resigned from her job as spokeswoman for Representative Stephen Fincher (R., Tenn.) after posting inappropriate criticisms of First Daughters Sasha and Malia Obama on Facebook.

This is great because America wasn’t really in the market for a Troll in Chief, and the subsequent apology Lauten offered didn’t help win friends and influence people. The long weekend was a tender time that had already left a lot of people feeling exposed as many Americans wrestled with the meaning of the secret proceedings that led to the Ferguson Decision.

Then, as now, is not the time to revel in shades of racism and mean-girl snark to make a political point, which is exactly what Lauten did. Spectacularly tone-deaf to where we’re at as a country right now, she went all in on Malia and Sasha, Michelle and Barack’s daughters, and Marion Robinson’s grands for their seeming and refreshing disinterest in the corny tradition that is the annual White House Thanksgiving turkey pardon.

“I get you’re both in those awful teen years, but you’re a part of the First Family, try showing a little class,” Lauten wrote.

What she neglects to acknowledge is just how awful those teen years can be. Instead, she piles on. These young ladies are shown standing exposed to the world when everything about them is changing and adjusting at a rapid pace in ways they might not understand because that is what it means to be an adolescent.

Worst of all, Lauten needlessly sexualized the girls by saying, “Dress like you deserve respect, not a spot at a bar.”

Girls have a hard enough time feeling good about their developing bodies without creepy, inappropriate and out-of-context comments like these. This comment felt just as bad as any leering guy on the street wolf-whistling to female passers-by.

It has never been more important to value a young woman’s humanity as she works to be vital and relevant, living and loving, hoping one day she’ll be valued for her efforts and be paid fairly and rewarded accordingly.

And in a society where bullying is rampant, it’s honestly unbelievable to me that Lauten so blindly bullied these girls. Did Lauten not even see the movie Bully? I still cry thinking about it.

While I appreciate that Lauten later tried to apologize, to me it was a failure.

By not directly addressing her apology to the First Daughters (notice how her initial heartless critique was directly addressed to them, though?), Lauten ascribed “superhuman” qualities to them. Meaning, she didn’t consider how her comments might make them or other girls feel, bearing out what Adam Waytz and his research team revealed in a recent study about white attitudes toward blacks.

“Today, a subtler form of dehumanization of blacks persists, with powerful consequences; it increases endorsement of police brutality against blacks and reduces altruism toward blacks,” according to the paper published in Social Psychological and Personality Science.

It is no surprise to me that social media went apoplectic over the weekend upon learning what Lauten had done and how she handled it. It shows that the public has had it up to here with the nastiness of political discourse, especially when race, gender and sexuality are involved.

In her position as the spokeswoman (now former) for Representative Fincher, it was Lauten’s very job to be a communications expert, yet she proved incapable of reading the signs of the times and the particularly sensitive moment happening in this nation right now.

Lauten appears to be one of those women who vote against their own interests, mistaking proximity to the white power structure for real power.

The lack of respect in her original Facebook post and the subsequent half-hearted apology was unforgivable and unforgettable. Regardless of what Lauten meant, her bad behavior is a reckoning moment for so many other things.

Now that Lauten has given up her job, perhaps she can spend more time reclaiming her own humanity — on her way to seeing ours.

Douglas is a journalist living in Chicago. 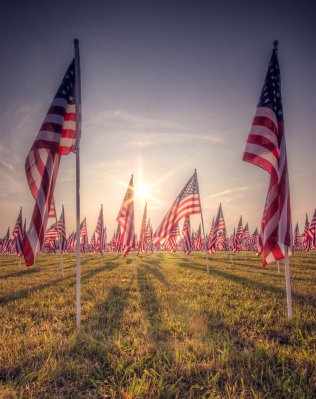 Does America Need More Than One President?
Next Up: Editor's Pick