Hong Kong’s Chief Executive Leung Chun-ying has told leaders of the city’s pro-democracy demonstrations who say they are now on hunger strike that their efforts are “futile,” but that he hopes they stay safe.

Speaking to reporters Tuesday, Leung said he hopes the three fasting student leaders, including 18-year-old Joshua Wong, will “take care of their health” as temperatures in the usually balmy city begin to fall.

The trio announced on Monday evening that they are on indefinite hunger strikes in order to achieve the right to freely elect the leader of the former British colony in 2017.

Yet the Beijing-backed Leung reiterated that any changes to the election process in Hong Kong “must comply with the Basic Law,” the city’s de facto constitution. Hong Kong government officials often cite the document as supporting the Chinese ruling party’s insistence on vetting candidates for the financial hub’s highest post.

“Any form of resistance cannot achieve universal suffrage for Hong Kong,” read a government statement, referring to the hunger strikes.

The students’ pledge to go hungry seemed to mark a return to nonviolent confrontations with the Hong Kong government, following a disastrous attempt by protesters to escalate the demonstrations by ringing the government headquarters on Sunday night. Dozens were arrested and scores hospitalized in the resulting clashes with police.

The strikers also appeared to be seeking a new rallying point for their movement, the future of which has become increasingly uncertain as protesters enter their 10th week of waiting in the streets for a response the government flatly says it will not give.

“Today, we have decided to do this because we feel have no other road to take,” Wong told reporters on Monday night.

The three founders of pro-democracy group Occupy Central on Tuesday said they would surrender to police and urged student demonstrators to leave the streets and continue their efforts through safer channels. Occupy Central, whose leaders are professionals and academics, had originally called for sit-ins in Hong Kong’s main commercial artery, but its members were later a scarce sight in the protest camps, as students leaders ascended to the movement’s helm. “For the sake of the occupiers safety, for the sake of the original intention of love and peace, as we prepare to surrender, we three urge the students to retreat,” read a statement from the group. Calling the movement for free elections in Hong Kong “a long-term struggle,” the trio — Benny Tai, Chan Kin-man and the Rev. Chu Yiu-ming — encouraged students to “recuperate and build up strength” and “extend the spirit” of the movement through various means.

Hong Kong’s demonstrations seemed to reach boiling point on Monday when Leung issued his harshest warning yet to protesters.

The 60-year-old leader of the territory said that police are prepared to take “resolute action” to put an end to the street occupations, reminding protesters that officers could still rout their main protest site in the city’s glitzy Admiralty district. The encampment, a sprawling suburb of camping tents under a twinkling Christmas display and abutting a shiny Audi dealership, has remained mostly intact, despite high-octane confrontations between police and protesters at its outskirts.

“Some people have mistaken the police’s tolerance for weakness,” Leung warned. 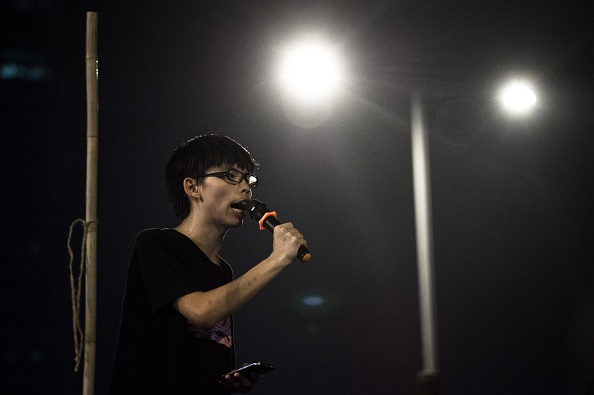