St. Louis Rams players put their hands up to show support for Michael Brown before a game against the Oakland Raiders at the Edward Jones Dome, St. Louis, on Nov. 30, 2014
USA Today Sports—Reuters
By Sports Illustrated / Christopher Woody and Molly Geary

The NFL will not punish St. Louis Rams players for their “hands up, don’t shoot” gestures made during introductions before Sunday’s game against the Oakland Raiders, a league spokesman told CNN’s Rachel Nichols.

“We respect and understand the concerns of all individuals who have expressed views on this tragic situation,” Brian McCarthy, the NFL’s vice president of communications, said in a statement.

The St. Louis Police Officers Association had requested the NFL punish the players.

The gestures, made by Stedman Bailey, Tavon Austin, Jared Cook, Chris Givens and Kenny Britt, mirrored those made by protestors in Ferguson, Mo., and throughout the country and world after the shooting death of 18-year-old Michael Brown, who was unarmed, by Ferguson police officer Darren Wilson in August.

St. Louis prosecutor Robert McCulloch announced on Nov. 24 that a grand jury would not indict Wilson for the shooting.

The NFL’s statement comes after a lengthy denunciation of the players’ action by the St. Louis Police Officers Association. SLPOA business manager Jeff Roorda called for discipline from the league and suggested that his organization would continue to pressure the league and its sponsors until it felt its grievances had been addressed.

Rams coach Jeff Fisher and a spokesman for the team said that they were not aware of the players’ plans before the game.

Demonstrations before and after the announcement of the grand jury’s verdict led to clashes between protestors and police in Ferguson. 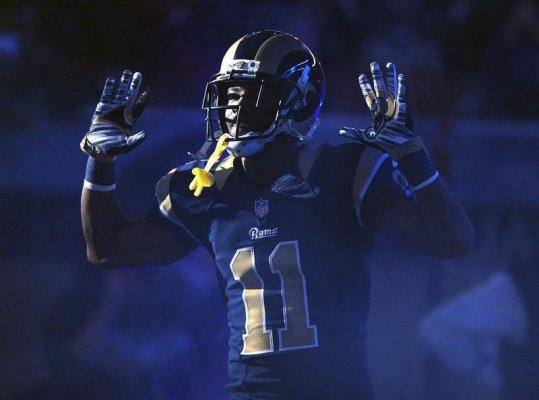