Arianna Huffington on the Key to Finding Success (Without Burning Out)

In her new book, Thrive, Arianna Huffington makes the case for upending our culture of overwork and 24-hour connectivity. TIME spoke to Huffington about her mission to change corporate priorities and what we should be giving up to get more sleep.

TIME: You have a lot in Thrive about the importance of sleep. And I know a decent night’s sleep is the holy grail for many of us. So why is that so difficult to achieve?

We are now moving to the point where people know they need more sleep, but actually doing it is the key. That’s why I’ve included baby steps at the end of each section of the book, about three little things we can start doing, like making your bedroom dark and keeping it cool. You can start by giving yourself 30 minutes more a day, or at least taking a nap. I went from 4-5 hours sleep a night, to 7 hours a night. It was a gradual changing of habits over a period of weeks. But then you begin to feel better and it’s such a reward and that makes it easier to prioritize.

What do you say when people tell you it’s impossible for them to get enough sleep?

People say they don’t have time, but if you actually look at what they’re doing, at their day and their night, they do. You don’t need to stay up to watch Jon Stewart. The key for me has been saying no to good things. Now I know that if I get enough sleep, my life is going to be much happier and more creative. In my pre-awakened state I would drag myself through the day. I would look under my desk and wish I could crawl down there and rest.

So it’s about changing our priorities?

I was looking at my phone and saw that it was 95% charged and I thought, we are so much more conscious about how charged our phones are versus how charged we are. It’s too bad we don’t have the same kind of indicator to show how depleted we are. We have a million ways to recharge our phones, portable chargers, cables, extra battery packs, but look at how we treat ourselves. Our own energy has to be below 5% before we figure out that we need to sleep, to recharge, to take a break. That has to change.

In the wake of the recent recession, a lot of people are afraid to set limits with their employers that would help them combat burnout. Do you have advice for them?

I feel very strongly that we’re going to be better at work when we’re taking care of ourselves. We are able to see the one red flag that others are missing or be more creative and more productive. We’re moving to this new era, the second machine age, where a lot of tasks are being done by robots and machines, and increasingly, creativity is going to our most valuable asset.

Let’s be realistic though, there are situations where you might have a terrible boss and horrible working conditions. Let’s imagine all those conditions are true, but even then we still have the opportunity to take care of ourselves outside of work. Our choices do not end with the boundaries of work. You may be struggling to put food on the table, for example, but you still can choose your attitude, however terrible your working conditions. Choosing your attitude has a deep impact on how you feel.

There are lots of new books with advice for young women. How do you think young women should navigate that push and pull between starting a family and ramping up their careers?

I think a lot of young women look at my generation and say we don’t want to do it this way. They say, ‘we don’t want to burn out in the process of climbing the career ladder. We don’t want to make those sacrifices in our health and happiness. They’re prioritizing giving.’ But I have a bigger dream and wish for all women where we lead a third women’s revolution. We don’t just want to be at the top of the world, we want to change the world because it’s not working. I think it’s a stunning statistic, that women in stressful jobs have 40% increased risk of heart disease.

What role does media play in our culture of overwork? After all, we’re still seeing movies like The Wolf of Wall Street in which money and power are glamorized.

We are living in a split-screen world. On one side of the screen you have the old paradigm in full force with people running around the clock thinking that they can’t stop pushing to get more, like the rats in the Skinner experiment who keep pulling the lever even after there’s no cheese. There are billionaires who keep pushing the lever even though more money won’t add anything to their life. And then, on the other side of the screen, you have the 35% of corporations that have incorporated some form of stress-reduction practices in their workplace and a number of CEOs coming out about their own meditation practices. And of course all the scientific data supporting the benefits of slowing down.

How do you change corporate culture in companies that might not have a CEO who has discovered meditation or any other healthy living measures.

The way you do it is to expose leaders to thee facts and the data we have showing the benefits of stress-reduction programs, like yoga, acupuncture and meditation. After CEO Mark Bertolini made these changes at Aetna he brought in Duke University to look at whether there were cost savings. They found a 7% reduction of health care costs (in 2012 for Aetna employees who participated), and these employees had 69 additional minutes per day in productivity. Those numbers are the way to convince leaders that this matters.

Arianna Huffington is the co-founder, president and editor-in-chief of The Huffington Post Media Group. You can find more about Thrive: The Third Metric to Redefining Success and Creating a Life of Well-Being, Wisdom and Wonder here. 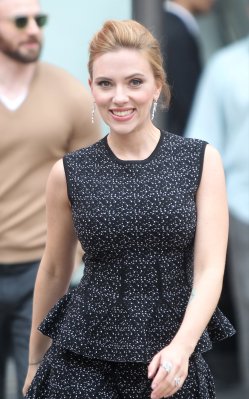 Scarlett Johansson On Motherhood and Having It All
Next Up: Editor's Pick