The claim this weekend by an Egyptian armed group linked to the Islamic State in Iraq and Syria (ISIS) that it had killed an American oil worker has brought renewed international attention to a long-running insurgency in the Sinai Peninsula and raised concerns that the Sinai jihadis might increasingly seek targets outside of their narrow focus on the Egyptian military and security forces.

The group, calling itself the Sinai Province of Islamic State, published an image on Twitter on Sunday of a passport and two identification cards belonging to William Henderson, a 58-year-old employee of the Apache Corporation and Qarun Petroluem Co. A man by the same name, a petroleum expert working in Egypt’s Western Desert, reportedly died in August.

Henderson was the victim of a “tragic carjacking incident this past August” which is “still under investigation by the U.S. government,” according to Apache spokesperson Castlen Kennedy. The Enid News & Eagle in northwestern Oklahoma published an obituary for Henderson in August saying he had “passed suddenly.” The U.S. Embassy in Cairo declined to comment.

The militants’ claim highlights the bloody nature of the confrontation between the Egyptian military and armed groups in Egypt’s Sinai Peninsula. Egypt’s military and police have been the targets of a surge in attacks since the 2011 uprising that forced out Hosni Mubarak and loosened the central government’s grip on Sinai. The attacks accelerated dramatically following the military’s ouster of elected Islamist President Mohamed Morsi in July 2013.

Until last month, when it pledged allegiance to ISIS in an online video, the self-proclaimed Sinai Province was known as Ansar Beit Al-Maqdis (ABM), or Partisans of the Holy House, a religious reference to the city of Jerusalem. The group first made itself known in 2011 when the uprising against Mubarak routed the police in Sinai. The new name is misleading since, unlike ISIS in Iraq and Syria, the group controls no territory in Egypt.

The group soon became Egypt’s deadliest insurgent group, striking in Sinai, Cairo, and the Nile Delta. It’s attacks include multiple attacks on a pipeline through Sinai carrying natural gas to Israel, and the assassination in Cairo of a top Interior Ministry official, and several deadly bombings of police installations. Over nearly four years, the insurgency has killed hundreds of army conscripts and police.

The insurgents’ campaign reached another turning point on Oct. 24 of this year when armed men carried out a car bombing and subsequent ground attack that left 31 Egyptian soldiers dead near the north Sinai town of Sheikh Zuweid.

Egyptian authorities responded to the attack with overwhelming force, using bulldozers and dynamite to destroy entire neighborhoods in the nearby town of Rafah, which straddles Egypt’s border with the Gaza Strip. In creating a “buffer zone” along the border, the government hoped to limit the smuggling of weapons and people in and out of Gaza.

The demolitions and the resulting displacement of thousands of people were a sign of the government’s desperation, said Mokhtar Awad, a research associate at the Center for American Progress who tracks the Sinai insurgency. “What we’ve seen the military doing is the number one non-counterinsurgency step, which is effectively alienating the population almost by design,” he says. “They resorted to the equivalent of plan F: ‘We’ll just blow everything up.’”

Long before the last month’s campaign in Rafah, the government’s harsh measures in north Sinai are one of a confluence of political factors that form the context for Ansar Beit Al-Maqdis’ rise. Since Israel handed the Sinai back to Egypt following the 1979 Camp David Accords, the Egyptian state has marginalized the peninsula’s residents, stoking resentment by barring them from serving in the security forces and sidelining many from the formal economy.

The militants have also been bolstered by the radicalization fostered by the civil war in Syria. Court documents from the trial of a group of ABM members, obtained this year by the Egyptian news website Mada Masr, describe how one group of young men from Cairo joined the group after fighting with jihadis in Syria.

The Egyptian military has banned virtually all international media from north Sinai for months, rendering impossible any direct reporting on the conflict there. Any contact with the group could also be dangerous. The resulting information blackout makes it difficult to predict what effect Ansar Beit Al-Maqdis’ declaration of allegiance to ISIS will have on the dynamics of the insurgency and counterinsurgency.

Some observers speculate that the new alliance will push the Sinai jihadis to broaden their search for targets, as they look beyond the Egyptian military. Henderson’s death could fit that pattern. “We will likely see more outside-Sinai terrorist operations without any kind of immediate strategic gains just to prove that they are there and to cause as much havoc as possible,” says Awad.

“It bolsters the state and the state’s approach to the crackdown against any and all,” says Michael Hanna, a fellow at the Century Foundation in New York, in reference to ABM joining ISIS. “It’s a boon to those who want to paint the most far-reaching picture of the threat that Egypt faces. It’s a shot in the arm to hardliners in the Egyptian security establishment. But of course there’s a real terrorism problem, there’s no question about that.” 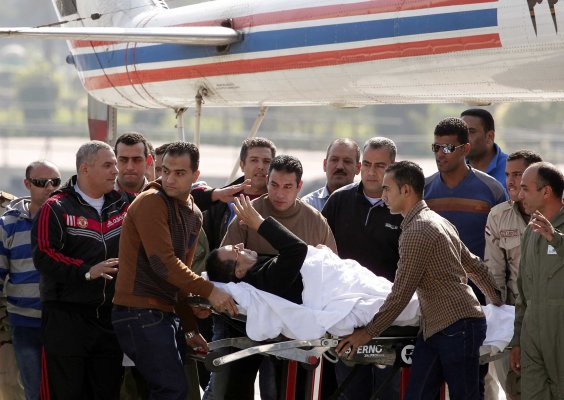 Mubarak Ruling Sinks In
Next Up: Editor's Pick