The St. Louis Police Department condemned St. Louis Rams football players who ran onto the field Sunday night with their arms raised in the “hands-up, don’t shoot” pose. The gesture has been seen in demonstrations across the nation this week in the wake of the Ferguson grand jury’s decision not to indict a white cop for shooting and killing unarmed teenager Michael Brown in August.

“The St. Louis Police Officers Association is profoundly disappointed with the members of the St. Louis Rams football team who chose to ignore the mountains of evidence released from the St. Louis County Grand Jury this week and engage in a display that police officers around the nation found tasteless, offensive, and inflammatory,” the police said in a statement.

The police said that the “hands up, don’t shoot” gesture “has become synonymous with assertions that Michael Brown was innocent of any wrongdoing and attempting to surrender peacefully when Wilson, according to some now-discredited witnesses, gunned him down in cold blood.”

Protesters around the country have been raising their arms in the “hands up, don’t shoot” gesture to protest the grand jury’s decision not to indict now-former Ferguson police officer Darren Wilson for shooting Michael Brown, who did not have a weapon on him, multiple times. Massive demonstrations in New York, Los Angeles, and Washington D.C. have included thousands of people making the gesture in solidarity with the Brown family and to draw attention to the larger issue of racial profiling.

Jeff Roorda, the business manager for the St. Louis Police Officers Association, was especially incensed by the Rams, noting that the team and the NFL depended on the police to keep fans safe from violent protesters.

“I know that there are those that will say that these players are simply exercising their First Amendment rights,” he said in a statement. “Well I’ve got news for people who think that way, cops have first amendment rights too, and we plan to exercise ours. I’d remind the NFL and their players that it is not the violent thugs burning down buildings that buy their advertiser’s products. It’s cops and the good people of St. Louis and other NFL towns that do. Somebody needs to throw a flag on this play. If it’s not the NFL and the Rams, then it’ll be cops and their supporters.”

A spokesman for the St. Louis Rams told KSDK.com that the team did not know about the demonstration beforehand. 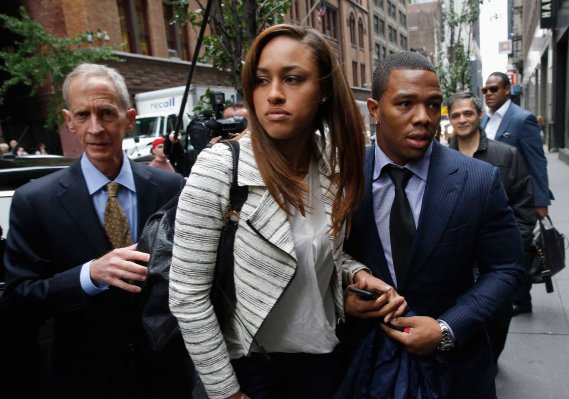 Janay Rice Reaffirms Support for Ray
Next Up: Editor's Pick