Taiwan's President Ma Ying-jeou walks out of a voting booth at a polling station in Taipei during local elections on Nov. 29, 2014
Frank Sun—Reuters
By Emily Rauhala

Ma Ying-jeou is having a bad week. Taiwan’s President went into this weekend’s local elections battered, his approval ratings low. Then on Saturday his party, the ruling Kuomintang (KMT), got thoroughly trounced, losing ground across the island, including key mayoral posts in Taichung and Taipei. The results prompted Prime Minister Jiang Yi-huah to resign and 80 cabinet colleagues to also offer to step down — an act of contrition that may or may not be enough to staunch growing dissatisfaction with the government’s handling of food-safety scandals, the economy, and the island’s relations with China. Ma may yet resign his chairmanship of the KMT.

China and Taiwan have been at odds since Mao Zedong’s communists prevailed and the nationalists beat a retreat across the strait. Ma came to power in 2008 promising to put existential questions about Taiwan’s relationship with China on hold, focusing instead on building economic ties with the Chinese mainland. He was re-elected in 2012 in a hard-fought battle with the opposition Democratic Progress Party (DPP), which is generally more skeptical of Beijing. It was a narrow victory — Ma beat challenger Tsai Ing-wen by about 6% of the vote — and in the years since, his government lost more ground. This spring, demonstrators occupied the legislature under the banner of the Sunflower Movement to protest the government’s handling of a proposed trade pact with China, only heightening the sense of a political reckoning to come.

This weekend, voters delivered it. While it might be tempting, especially from a distance, to read the results as a sort of referendum on cross-strait ties, to do so is to misunderstand the island’s electoral landscape. What the results show, Taiwan watchers say, is that the voting public is deeply unhappy with the status quo under the KMT, including, but not limited to, their China policy. They are worried about quality of life issues, clean government, and want their leaders to focus on competing globally, not just trading with China. “These are local elections, fought on local issues, by local personalities, so we have to be careful not to overinterpret the results” says Alan D. Romberg, distinguished fellow and the director of the East Asia program at the Stimson Center in Washington, D.C. “Cross-strait relations were not at the center this time, but next time, in [the 2016 general elections], they will be.”

Indeed, the KMT losses are particularly striking considering that the 2016 presidential election is fast approaching. The prospect of a KMT defeat in that contest — that is to say, a win by the opposition DPP — could potentially alter the calculus of cross-strait ties. Unlike the KMT, which accepts some iteration of Beijing’s “one-China policy,” the DPP is more reticent. The DPP maintains that Taiwan is already a sovereign nation and should engage with China on those terms. The DPP does not see reunification in the future, a no-no for Beijing. As such, the prospect of a DPP government in 2016 is sure to worry the Communist Party’s top cadres. Says Shelley Rigger, a Taiwan specialist at Davidson College in North Carolina: “Beijing is definitely not loving this.”

Especially right now. Since late September, pro-democracy demonstrators in Hong Kong have occupied for long stints three neighborhoods in the former British colony, demanding a more representative voting system. The movement is, like the Sunflower Movement before it, student-led and fueled by a deep distrust of the ruling Chinese Communist Party in Beijing. Though Hong Kong is not — as any Taiwan person would tell you — the same as Taiwan, Beijing cannot be pleased with the parallel. Beijing sees Taiwan as a renegade province and compares Hong Kong to an impertinent child. At a time when President Xi Jinping is speaking evocatively of an “Asia-Pacific dream” and forging ties abroad, it is awkward to have trouble at (what he considers) home.

Going forward, Taiwan politicians must find ways to engage with China without alienating a public that is increasingly wary of Beijing’s embrace. “The question for China is: How do we deal with a Taiwan that does not make anything easy?” Rigger says. After the week he has had, President Ma may be wondering the same thing. 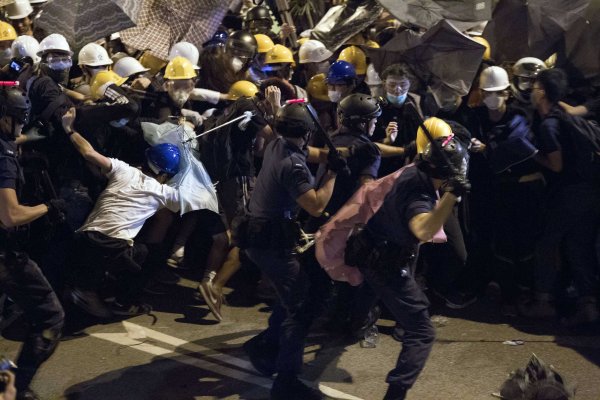