The Drumsticks of War

A member of Afghanistan's security forces arrives at the site of a Taliban attack on a foreign-aid workers' guest house in the Afghan capital of Kabul on Saturday. Three South Africans perished in the attack.
Omar Sobhani / Reuters
By Mark Thompson

The average American couldn’t be blamed for missing, over the long Thanksgiving weekend, the growing evidence that the deaths of the 6,841 U.S. troops in the wars in Afghanistan and Iraq may have been in vain. The nation is weary of war, and holiday news media coverage—fallout in Ferguson, Mo., Black Friday gluttony and football—reflected America’s growing disinterest.

But for anyone paying attention, the news over the weekend was decidedly bleak.

Suicide attacks have been averaging one a day in the Afghan capital of Kabul over the past two weeks. On Saturday, the Taliban attacked a guesthouse, killing a South African father and his two teenage children. After detailing the carnage Sunday, Kabul’s police chief quit in despair. The same day, President Ashraf Ghani, unable to form a new government, fired most of the ministers he inherited. The Taliban overran what used to be the biggest British army base in southern Afghanistan, a month after the Brits had turned it over to Afghan security forces. (Later, Afghan forces took it back.)

About 1,400 miles away, in Baghdad, Iraqi Prime Minister Haider al-Abadi said Sunday that his government has been paying the salaries of at least 50,000 “ghost soldiers.” It’s not like Iraq can afford to pay non-existent troops: al-Abadi also said he has had to toss out his proposed 2015 budget because it was based on selling Iraqi oil at $70 a barrel (it fell to $64 last week, he noted—a cut of nearly 10%). And an Iraqi military helicopter, trying to hit targets belonging to the Islamic State of Iraq and Greater Syria, killed an innocent pair of brothers Saturday in the town of Yathrib. A second airstrike killed 15 people who were headed to the brothers’ funerals.

Such problems are common in war. They’re just not common after more than a decade of U.S. sacrifice, and repeated pledges by those in charge that such sacrifices will not have been made in vain.

Unfortunately, there’s now no one in charge at the Pentagon. The White House had the temerity to oust Defense Secretary Chuck Hagel last Monday—while praising him effusively—without having a candidate to take his place. In the military, that’s called dereliction of duty. During wartime—for those in uniform—it’s punishable by death. For everybody else, it’s just politics. 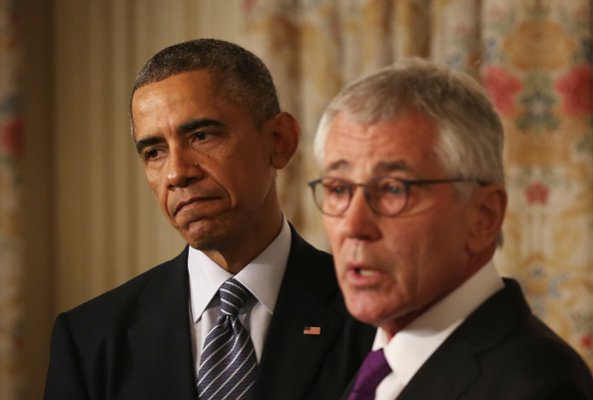