Baltimore Ravens running back Ray Rice sits on the sideline in the first half of an NFL preseason football game against the San Francisco 49ers on Aug. 7, 2014, in Baltimore.
Nick Wass—AP
By Sports Illustrated / Molly Geary

Two of those teams are the Indianapolis Colts and New Orleans Saints, though neither are expected to pursue him, according to ESPN. The other two teams have not been identified.

Rice won his appeal of an indefinite suspension and was reinstated to the NFL on Friday, making the 27-year-old eligible to sign with any team.

Rice has missed the entire 2014 season after his two-game suspension for being arrested on domestic violence charges turned into an indefinite suspension following the Sept. 8 release of video showing Rice striking his then-fiancée in a casino elevator. The Baltimore Ravens terminated Rice’s contract that same day.

On Friday, Judge Barbara Jones wrote in her decision of Rice’s appeal that she believes Rice told the truth about what happened in the elevator to commissioner Roger Goodell at a June meeting, making the second suspension “arbitrary.”

Last season, Rice had 660 yards and four touchdowns on 214 carries in 15 games. His 3.1 yards per carry average was the lowest of his six-year career. 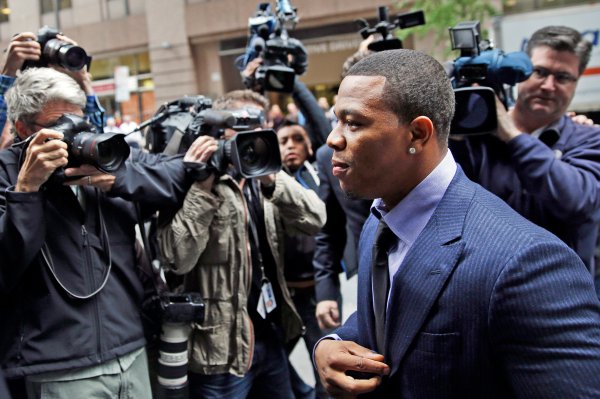 Ray Rice Allowed Back
Next Up: Editor's Pick