Janay Rice listens as her husband, Baltimore Ravens running back Ray Rice, speaks during a news conference at the team's practice facility in Owings Mills, Md, May 23, 2014.
Patrick Semansky—AP
By Sports Illustrated

The wife of NFL running back Ray Rice explained what happened the night she was struck by Rice in the elevator of an Atlantic City hotel.

Janay Rice’s account of the incident, which includes details about what took place in the ensuing months, was written by ESPN’s Jemele Hill, but Janay was given “approval over its content and release date.”

In the story, Janay Rice said that the Ravens felt that the press conference held after the incident was “something that they felt we should do.” The conference, staged on May 23, received backlash on social media. The team’s official Twitter account said the following in a tweet: “Janay Rice says she deeply regrets the role that she played the night of the incident.”

Rice said that her apology “followed the Ravens’ suggested script,” according to the story.

In the story, Janay said that she and Ray were sitting down at a restaurant inside a casino after sharing multiple bottles of liquor. Tensions between Janay and Ray escalated after Janay reached for Ray’s phone, according to the story. Janay said that what happened inside the elevator is “foggy,” the story says.

Janay, who was Rice’s fiancée​ at the time of the incident, also addressed the date of her marriage in the story. She said she didn’t choose the date because it was one day after Rice was indicted, according to the story.

Also included in the story is Janay’s account of how NFL commissioner Roger Goodell acted during Janay’s and Ray’s meeting with him. She described Goodell as a “really reasonable and caring guy” and said she was not surprised when he suspended Rice two games, the story says.

Janay also said that Ray told Goodell and his colleagues “everything that happened,” according to the story.

Rice was later suspended indefinitely after being arrested on domestic violence charges. It was reported on Friday that the suspension has been overturned and Rice has been reinstated into the NFL after he won his appeal. 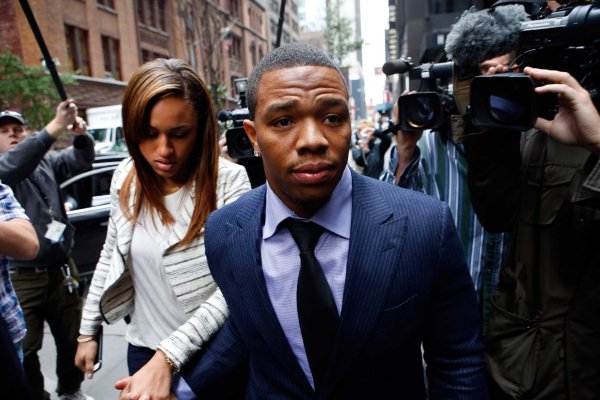