The True Story of The Imitation Game

Though The Imitation Game was largely based on the biography Alan Turing: The Enigma, much of Alan Turing’s life is shrouded in mystery. Turing, played by Benedict Cumberbatch in the film, is credited as the father of computer science. He cracked codes produced by the German military’s seemingly unbreakable Enigma machine during World War II using math, engineering and still-to-be-invented computer science. But most of the documents tracing his work for the British government have been destroyed and little is known about Turing’s personal life.

Here’s what is likely truth and what is embellishment in The Imitation Game based on Alan Turing: The Enigma and the Turing Exhibition at London’s Science Museum.

Christopher, an older student at Sherborne School in Dorset, was also interested in math. Turing harbored feelings toward Christopher, though Turing believed his love was not reciprocated. In the movie, Turing learns of Christopher’s death after-the-fact from his headmaster. In reality, Turing had been told his friend was sick and to prepare for the worst before Christopher passed.

Christopher’s death did spur Turing to pursue mathematics in the hope that he could understand whether part of Christopher could somehow live on without his body. In the year after his death, Turing wrote an essay in which he discussed how the soul might survive after death with a nod to the new field of quantum mechanics.

Alan Turing was gay at a time when homesexual activity was outlawed in England. In 1952, he was convicted of “gross indecency.” (He admitted to being gay but pled not guilty because he thought the law was unjust.) He was sentenced to probation that involved chemical castration (see more below) and committed suicide within two years with cyanide.

The filmmakers decided not to include the suicide in the movie even though they filmed the scene. Benedict Cumberbatch explained to the press at New York City’s 92Y that in the film’s last scene, “Someone [is] telling [Turing] something he never had told to him in his life: That he did matter — the fact that he was regarded as different and not normal was hugely important to the world and to everybody around him. No one had told him that in his life. So to end it on that note, with someone explaining, was our way of thanking him in the structure of the film, our eulogy to him.”

Joan Clarke is invited to Bletchley Park, the home of the government’s code breaking operation, after completing a crossword puzzle

Clarke’s professor at Oxford helped her get into the program (which was dominated by men). The crossword puzzle test scene is fictionalized, though that was a method the government did use to recruit code-crackers at the time.

In the movie, the Clarkes do not want their daughter to crack codes for the government because she is a woman, but that aspect of the film was added for dramatic tension.

In the film, Turing tells Clarke that he named the machine “Christopher.” (The audience knows it’s named after Turing’s first love, though Clarke doesn’t know that part.) Turing is obsessed with the idea of using a computer to engineer a human brain or even a soul, and dubbing the computer “Christopher” makes it seem as if Turing may be trying to find a way to resurrect his old love. In reality, the machine was called the Bombe and nicknamed “Victory.”

In the film, Cairncross says he will tell the government Turing’s secret sexuality if Turing reveals that Caincross is a spy. The blackmail works for a while and Turing covers up for Cairnscross. In fact, the two never met. Though Cairncross was at Bletchley Park, he did not work with Turing. There were strict separations between the units. As far as historians can tell, Turing never hid spies from the government.

Turing asked Clarke to marry him

Turing and Clarke were indeed engaged for a time. And, like in the movie, they never went through with the marriage. Turing revealed his true sexuality to his fiancée and, according to Turing, Clarke was “unfazed” by the revelation.

Some critics have said the friendship and pseudo-romance between Turing and Clarke is overblown in the film. Keira Knightley, who plays Clarke, told the Huffington Post, “I think what we’re trying to get to is the essence of what it was. And at that time with Alan, to my knowledge, he didn’t have another affair, or an affair actually, with a man. His big friendship was with a woman and he did ask her to marry him.”

MORE: The History Behind Benedict Cumberbatch’s The Imitation Game

The government thought Turing might be a Soviet spy

In the film, an officer interrogates Turing thinking he’s a spy and accidentally uncovers Turing’s sexuality. In reality, Turing was investigated for “gross indecency” after he reported a petty theft to the police. In his report, he concealed the fact that he was in a relationship with the possible thief. After the police pursued the charge, Turing finally submitted a five-page report admitting to his affair with a man.

Consensual sex between two men remained illegal until 1967 in England. To avoid prison, Turing accepted treatment with estrogen, chemical castration meant to neutralize his libido. Gay men were considered a security risk to the government because they were open to blackmail, so Turing lost his security clearance. Turing died on June 7, 1954. He was found with a partly-eaten apple, and many biographers have posited it was laced with cyanide. But the autopsy found four ounces of cyanide in Turing’s stomach, suggesting he drank the poison and ate the apple to make the experience more palatable.

Some have suggested Apple’s symbol, the apple, is a tribute to Turing, though Steve Jobs denied this connection on multiple occasions. 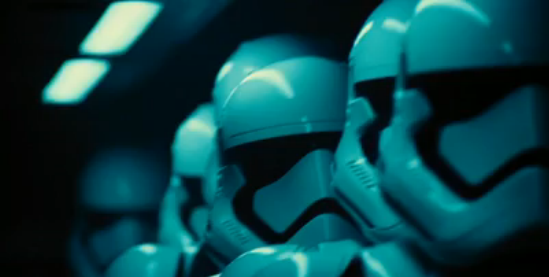 What to Know About the New Star Wars Trailer
Next Up: Editor's Pick