Author P.D. James poses for a portrait at the Oxford Literary Festival on April 9, 2011 in Oxford, England.
David Levenson—Getty Images
By Megan Gibson

British crime writer Phyllis Dorothy James White — who wrote under the name P.D. James — has died at her home in Oxford, England, it was announced Thursday. She was 94.

James, who wrote more than 20 books, was known as “the Queen of Crime,” for her fiction. Some of her best-known works included The Children of Men, which was adapted into a film in 2006, The Murder Room and Death Comes to Pemberley, a spin-off of Pride and Prejudice.

Born in Oxford in August 1920, James did not publish her first novel, Cover Her Face, until she was 42. She went on to become an international success, with many of works being adapted for the screen. She was also awarded the Crime Writers’ Association’s Diamond Dagger award in 1987 for lifetime achievement and the Medal of Honor for Literature in 2005 by National Arts Club. In 1991, she was named a Conservative life peer under the title Baroness James of Holland Park.

James told the BBC last year that she was working on another novel, though she noted, “With old age, it becomes very difficult. It takes longer for the inspiration to come, but the thing about being a writer is that you need to write.”

The news of James’s death was announced by her UK publisher Faber & Faber. In a statement, the publisher said of James: “She was so very remarkable in every aspect of her life, an inspiration and great friend to us all. It is a privilege to publish her extraordinary books. Working with her was always the best of times, full of joy. We will miss her hugely.” 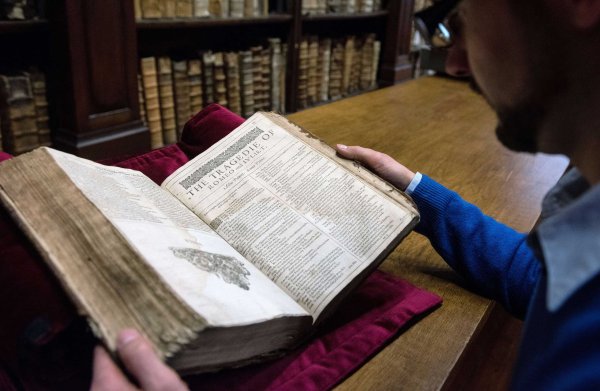 Shakespeare Folio Unearthed in France
Next Up: Editor's Pick