Hong Kong student leader Joshua Wong was charged Thursday with obstructing a bailiff clearing one of the city’s three protest areas, an accusation that the teenager’s lawyer says is motivated by the young protester’s politics and fame, not by fact.

Wong, 18, is a prominent face of Hong Kong’s pro-democracy movement. He appeared last month on the cover of TIME’s international edition and was named as one of TIME’s Most Influential Teens of 2014. He also features in TIME’s Person of the Year Poll.

He was arrested on Wednesday morning as police cleared a 60-day occupation of the Mong Kok district, where protesters had camped out demanding the right to freely elect their city’s top leader.

Wong was bailed for a modest $65 and, unless he is traveling to or from university, he cannot, as a bail condition, enter a large area of the neighborhood until his next court date on Jan. 14. The government could seek to end bail should Wong violate the ban or if he is arrested on another offense.

Should Joshua Wong Be TIME’s Person of the Year? Vote Below for #TIMEPOY

Wong’s lawyer, Michael Vidler, requested a court date as early as next week and accused the government of foot-dragging to prevent the popular student leader from playing a role in any future demonstrations in the volatile, contested district, located in the heart of the teeming Kowloon peninsula.

“The court should not be manipulated,” Vidler told the magistrate. “The real reason for this charge is that my client is a leader of a student organization that is involved in the call for true democracy in Hong Kong.”

“These are extraordinary times,” he added, outside court, noting that is was highly unusual for someone charged with a minor crime to have to seek bail from a court, rather than be quickly bailed by police.

A prosecutor said in court that the government was “not discriminating” against Wong and that it “treats each defendant equally.”

Wong has denied the allegations, and the details of his arrest are murky. A video shared on Wong’s Facebook page shows police tearing down a barricade without meeting any resistance, and a special police unit is then seen rushing into the crowd of protesters to arrest Wong. In the video, Wong appears to be standing still. A prosecutor declined to answer Vidler’s request in court that he describe the reasons for Wong’s arrest.

Vidler also said outside court that police had both punched Wong and “repeatedly grabbed him in parts of his body that caused him pain.” He declined to be specific. Wong also showed the media abrasions and bruising on his neck and the sides of his face.

Bailiffs began clearing the protest site in Mong Kok on Tuesday, acting on a civil injunction brought by bus and taxi companies frustrated with the continued occupation of a major thoroughfare in a busy shopping district. Police later took over the clearance and overnight chased protesters out of the area with pepper-spray cannons. In the morning, police pushed protesters out of the remaining protest site in a quick, methodical sweep.

Police arrested 148 people in the two days of clearing the site, including firebrand legislator Leung Kwok-hung and another student leader, Lester Shum.

Wong, who was without his usual glasses and was wearing two grey hoodies, was as fidgety in court as any teenager asked to stand still for too long. Standing with hunched shoulders, he chewed his lip, stretched his neck and shifted his weight as he surveyed the room.

Outside court, though, he was confident and straight-backed in front of dozens of media cameras — their bright lights on in the gray rain — and posed for photographs with a thumbs-up.

He told TIME that he hoped protesters would continue to occupy their camps in Admiralty and Causeway Bay districts until the government answers their demands for electoral reform. He also said he would “have discussions” with student leaders about what role he might have in any continued protests in Mong Kok.

“I hope the government will face the problem rather than have the bailiffs do it,” he said. 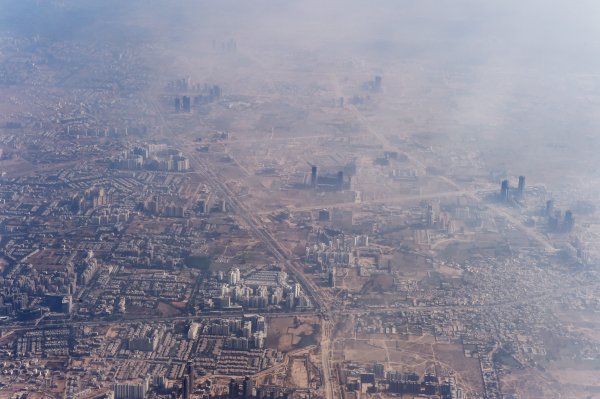 The World's Most Polluted City Is Even More Polluted
Next Up: Editor's Pick