Calm in Ferguson While Police Arrest 130-Plus in L.A. and Oakland

Police detain protesters during a march in Los Angeles on Nov. 26, 2014
Lucy Nicholson—Reuters
By NBC News

Cold and calm descended on Ferguson, Missouri, late Wednesday after two nights of violent protests against a grand jury’s decision not to indict Officer Darren Wilson in unarmed teen Michael Brown’s shooting death. But demonstrators in Los Angeles, Oakland and elsewhere across the country again took to protesting by blocking roads and, in some cases, clashing with police.

Police arrested about 130 demonstrators who had been marching through downtown Los Angeles after police determined the protesters were becoming a hazard to motorists. Police declared an unlawful assembly and later surrounded the group to begin making arrests … 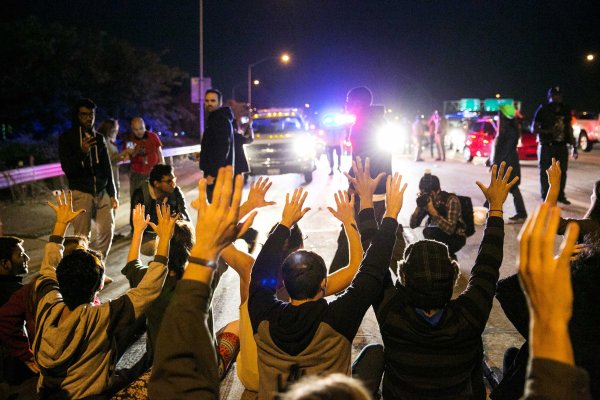 See How Ferguson Protests Rippled Across the U.S.
EDIT POST