New Delhi, the World's Most Polluted City, Is Even More Polluted Than We Realized

Smog envelops buildings on the outskirts of the Indian capital New Delhi on November 25, 2014.
ROBERTO SCHMIDT—AFP/Getty Images
By Rishi Iyengar

New Delhi has already been ranked the world’s worst polluted city by the World Health Organization, but a new study by U.S. and Indian scientists shows that the city’s air quality is far worse than previously thought.

American scientist Joshua Apte, working with partners from the University of California, Berkeley and Delhi’s Indian Institute of Technology, roamed the streets of the Indian capital in an autorickshaw laden with air pollution monitors. He found that average pollution levels were up to eight times higher on city roads, the Associated Press reports.

Apte compared the readings from his road trips to readings at urban background sites, which he says are already extremely high. The levels of PM 2.5, the particle known to be most harmful to human health, were found to be 50 percent higher on Delhi’s roads during rush hour than during ambient air quality readings. Black carbon, a major pollutant, was found to be three times higher.

“Official air quality monitors tend to be located away from roads, on top of buildings, and that’s not where most people spend most of their time,” Apte said. “In fact, most people spend a lot of time in traffic in India. Sometimes one, two, three hours a day.”

India is the third largest polluting country in the world, after the United States and China — who both signed a major bilateral climate deal in Beijing earlier this month.

Its rapidly growing vehicle numbers, expected to hit 400 million by 2030, are posing a major threat that the government is well aware of.

Several steps have been taken to reduce the number of Indian automobiles running on diesel, and the country’s National Green Tribunal also announced on Thursday that it would ban any vehicles older than 15 years from New Delhi’s roads.

But far more drastic measures will be required to make a meaningful dent in Delhi’s air pollution levels, which, according to the latest WHO Ambient Air Pollution Database, are at just under 300 micrograms per cubic meter. The world’s second most polluted city, Karachi, clocks in at a little over 250, while the major Chinese cities of Beijing and Shanghai, internationally notorious for their pollution, clock in a relatively fresh 120 and 80 respectively. 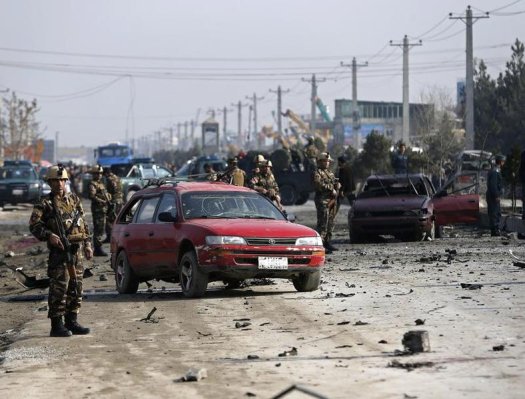 5 Dead in Suicide Blast on British Embassy Vehicle in Kabul
Next Up: Editor's Pick