The 5 Hottest Toys Americans Are Searching for Right Now

A Microsoft Xbox One game console at a Wal-Mart ahead of Black Friday in Los Angeles on Nov. 24, 2014.
Bloomberg—Bloomberg via Getty Images
By Fortune / John Kell

The upcoming holiday shopping season is crucial for the $22-billion U.S. toy industry, and early data suggests Disney’s “Frozen,” as well as electronics such as Xbox One and the Skylanders game, will be among the top sellers this year.

Data provider Experian Marketing Services has given Fortune a look at the hottest toy searches for the week ended Nov. 22, and “Frozen” handily tops the list. With the Christmas holiday just a little over four weeks away, consumers who wait too long could find it challenging to scoop up some of the top sellers.

“The holiday shopping season [is] more and more condense,” said Jim Silver, editor-in-chief of toy-focused website TTPM.com. It used to last 12 weeks, and then eight, he added. “Now it is a five-week season.”

Silver estimates that last year as many as 50 toys were sold out at some point during the holiday season, as retailers can find it challenging to restock shelves so quickly. But many of those supply shortages were temporary, and no one item became impossible to find. Retail executives at chains such as Toys ‘R’ Us say they are well positioned after months of merchandise planning to ensure they can meet demand.

Roughly half of all Americans plan to buy toys as gifts this year, according to a recent Nielsen poll of more than 2,200 adults. Alhough that indicates there will be a lot of interest, observers such as Fitch Ratings have said toy promotions will remain intense, as traditional brick-and-mortar retailers such as Toys ‘R’ Us compete with online retailers, including Amazon AMZN -0.89% .

Here are five toys that are dominating America’s search engines just a few days before the holiday season kicks into high gear.

Activision Blizzard’s ‘Skylanders’ videogame property has been a hot seller since its debut in 2011.
Courtesy of Activision Publishing, Inc.

Walt Disney’s “Frozen” leads Experian’s list, with the search term “Frozen dolls” gaining 181% in popularity on a week-over-week basis. “Frozen” is so popular that interest in the princess line has topped Barbie, the first time the fashion doll didn’t top the National Retail Federation’s holiday “Top Toys” survey in its 11-year history. Disney, which owns the “Frozen” property, benefits most from this craze though Mattel, and Jakks Pacific will also see stronger sales for the brand as they manufactured the dolls, costumes and other items based on the popular film. Retailers are also ready to meet demand (Toys ‘R’ Us, for example, has 250 “Frozen” items on its website).

Scooters often turn in a strong holiday performance and this year is no exception, as a $200 scooter called the Dareway ranks as the second most popular toy search. The Dareway looks like a mini-Segway and is designed for kids that weigh 89 pounds or less. Famosa, the toy maker behind the Dareway, claims the toy is essentially a hybrid–mixing features of a scooter and ride-on-cars. The item first hit shelves two weeks ago and has already sold out three times (it was supposed to come to market earlier in the year, but had some issues getting imported from Spain). Toy experts have pointed out that scooters remain a popular toy as they encourage kids to play outdoors.

Activision Blizzard’s “Skylanders” videogame property has been a hot seller ever since its debut in 2011, and each year the franchise is expanded with a new line of physical collectible toys that can interact with a video game. Though the technology that Activision first developed has led to knock offs by Nintendo and Disney, this list indicates Activision’s line remains the most popular. Searches for the “Skylanders Trap Team” have risen 30% for the latest week, Experian said. The newest version of the franchise has games available for traditional consoles such as the PlayStation and the Wii, as well as mobile versions for Android, iOS and Fire OS.

Among the top five toys, only the Max Tow Truck is new to the scene. It ranked 4th on Experian’s latest list, but wasn’t among the top 10 hottest searches in the prior week. That suggests that interest has notably spiked for this toy, a truck that costs about $60. Made by Jakks Pacific, the truck can pull and push up to 200 pounds and is stocked at all the major toy retailers. Of course, Jakks also developed an app for this toy.

The Xbox One made headlines late last month when a special promotion touted a $50 limited-time price cut to the console, bringing the price down to $349 for the holiday season. The price cut could be generating greater interest in the console, though searches tumbled 47% from the prior week. And while PlayStation 4 hasn’t generated as many searches as the Xbox One, the former device has been selling better. The PlayStation 4 has reportedly sold 13.5 million units through September, while the International Business Times said there are estimates that around 5 million Xbox One units have been sold. (Microsoft doesn’t release sales data for the Xbox One.) 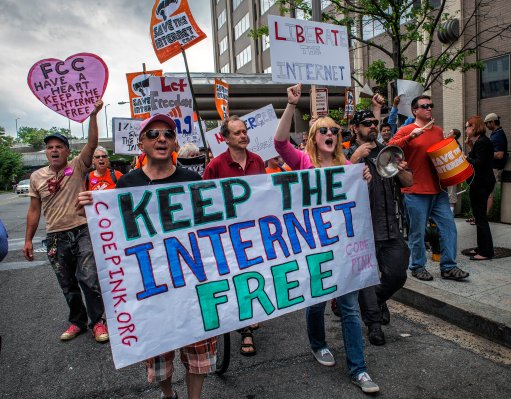 Five Ways Net Neutrality Supporters are Winning the Debate
Next Up: Editor's Pick