How Black Friday Invaded the U.K.

Four years ago, Black Friday was considered a distinctly American tradition, as exotic to non-Americans as the running of the bulls to non-Spaniards. “It was never even on our radar,” says Elizabetta Camilleri, CEO of SalesGossip, a web service that tracks discounts at 1,400 fashion labels across Europe.

“We’re seeing promotions from 250 branded retailers,” says Camilleri. “It literally doubled over last year.” And the deals keep coming. “We’re getting all of these retailers phoning us, saying, ‘We’ve just realized we’re doing a big promotion next week. Can we get on your home page?'”

So nearly 400 years after the Mayflower made it to Plymouth, Black Friday has taken the return trip and officially landed in the Old World. Some 65% of U.K. retailers plan to hold Black Friday sales this year, according to a survey by Barclays. Giants such as Tesco and Sainsbury’s have jumped in with aggressive, half-off discounts, while high-end boutiques, such as the clothing store Duchamp London, have shaved off 25% for the holiday.

Black Friday’s British invasion might seem odd, given that the sales revolve around an American holiday. Indeed, American retailers have considered the day so essential to their business that in the midst of the Great Depression, they lobbied to give Thanksgiving Day a little nudge on the calendar to prolong the shopping season. So how did Black Friday make the leap across the pond?

Amazon takes credit for introducing the tradition to the U.K. in 2010, though inklings of Black Friday sales could be found along one of London’s main shopping thoroughfares — Oxford Circus — as far back as seven years ago. Dan Taylor, retail manager for Duchamp London, recalls seeing Oxford Street closed to traffic and pedestrians pouring in for an embryonic version of a Black Friday sale. “It was packaged as something quite different,” Taylor says, “as ‘Christmas Comes Early.'”

Black Friday has further seeped into the U.K.’s public consciousness through a blend of media events from across the pond, global trade and plain old competition. “Everyone knows that it happens,” says Taylor. “Everyone then expects it to happen.”

This year, the shopping day got a boost from unseasonably warm fall weather. Sales of autumn apparel slackened over previous years. With fall boots and jackets taking up valuable shelf space and winter merchandise rapidly approaching, retailers had to find a way to move product fast.

“Black Friday became this holy grail of, ‘It’s going to solve all of our problems,” says Camilleri, who warns that the sales could undercut profits in the U.K. After all, Britain has already conditioned shoppers for its own version of Black Friday: Boxing Day, which falls on December 26. If retailers bookend the shopping season with steep discounts, some say, shoppers may steer clear of stores in the intervening period.

Still, there are signs that Black Friday’s spread may end at Britain’s shoreline. Retailers in continental Europe have — so far — proven immune to its charms.

“We’ve seen no sign of it happening in France or Spain,” says Camilleri. A strict regulatory environment prevents retailers in some EU nations from dropping prices outside of designated windows. But Camilleri notes a deeper instinct to resist. When she asked a German retailer if they might consider a Black Friday sale, the retailer simply replied, “We are not Americans.” 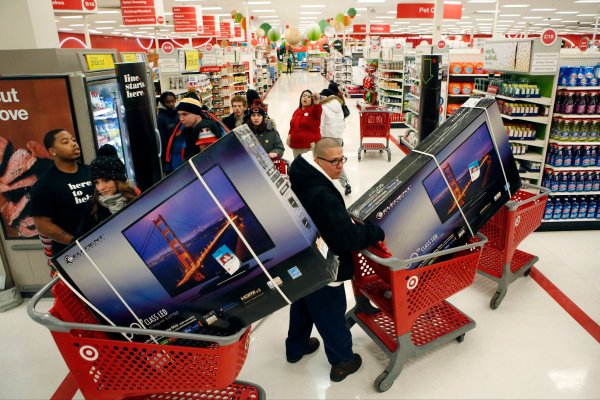