Babar Afzal in Stakmo village, situated on the outskirts of Leh. He helps Tsering Dolma with her daily chore of rounding up the goats, counting them and securing for the night.
Photograph by Sumit Dayal for time

The goats scatter, seeking out foliage to nibble across the rocky terrain of Ladakh, an inhospitable part of India’s Jammu and Kashmir state hard on the Himalayan mountains. Two ethnic Changpa goatherds greet a trio of outside visitors with a friendly juleh—hello in Ladakhi. Their hands busily circling Buddhist prayer beads, they listen as 38-year-old Babar Afzal asks questions, takes notes and explains the Pashmina Goat Project he established in 2012.

Indian pashmina, better known as cashmere, is a highly prized wool. It’s six times thinner than human hair and can cost several thousand dollars on the international market when turned into a single scarf. But the nomadic Changpas, most of whom are poor and illiterate, don’t see much of that money. Middlemen buy the raw pashmina wool for anything from $40 to $80 a kilogram and sell it for up to five times more. “There’s so much struggle in our lives,” says goatherd Tsering Dolma, 39, waving her rough hands at the shabby tent where her 3-year-old son roams in threadbare clothes. “Why would we want our children to continue in this trade?”

Babar believes he has the answer. His Pashmina Goat Project brings together more than 8,000 ethnic Changpa goatherds, some 1.5 million of their livestock and about 300,000 weavers into a cooperative whose aim is empowerment. The co-op educates the Changpas about the worth of their flocks, helps them negotiate better deals for their wool, and informs them about the increasingly erratic weather patterns that hurt the well-being of their goats. “The pashmina ecosystem is a storehouse of ancient culture and religious practices,” says Babar. “It’s important that this community flourish.”

The plight of the Changpas partly reflects that of Kashmir. The region, divided into Jammu and Kashmir on India’s side and Azad Kashmir on Pakistan’s, has been hotly disputed by the two countries since 1947. Besides the face-off between two bristling armies—already three wars have been fought over the territory—Jammu and Kashmir is subject to attacks by Islamic and separatist insurgents. In 1996, Babar left his birthplace of Jammu, the state’s winter capital, for New Delhi, joining thousands of other young Kashmiris desperate to escape a web of militancy and unemployment. After graduating in business management, he worked as a consultant for multinationals like McKinsey & Co. in India and overseas. But he couldn’t get Kashmir out of his mind. “I wanted to be back home,” he says. “The pull was strong.”

Since he returned to Jammu with his wife and daughter in 2008, Babar has been running restaurants and businesses promoting local food and handicrafts. He also spotlights the impact of climate change through his abstract art: paintings, mugs, even iPhone covers. “Climate change is Kashmir’s biggest problem, even worse than terrorism,” he says.

Ladakh’s goats, which grow to nearly a meter high and typically live about seven years, produce 80% of India’s pashmina. In recent years, however, supplies have dwindled as the weather changed. Ladakh’s Changtang plateau, which extends into neighboring Tibet, has long been a frosty wasteland where temperatures plunge to –30°C. Though hardy, more than 22,000 pashmina goats starved to death in 2012 because of an unusually harsh winter—more than a meter of snow fell instead of the normal 2 or 3 cm. “The horrific sight of thousands of dead goats and bewildered Changpas haunted me for months,” says Babar.

From this nadir was born the Pashmina Goat Project. Babar holds workshops to educate the goatherds about the exclusivity of pashmina and the consumer market, and how to deal with international buyers directly. They are also taught to add value by spinning the wool into fabric themselves, and will soon sell their own pashmina products through a knitwear brand called Village Pashmina. “If we asked for more money, the traders laughed at us because we had nowhere else to go,” says Sonam Dorjee, a Changpa. “Now we do.”

Babar also campaigns against pashmina that is spun by machines—as opposed to handlooms—and mixed with excessive low-quality wool. He hosts events, fashion shows and fair-trade expos countrywide to promote handspun material. The next phase will be mobile software that sends weather alerts to goatherds, so they can avoid storms and map safer migration routes. “[Babar’s] is the first voice speaking up for the poor and marginalized in the Himalayas,” says Pankaj Chandan, a regional head of WWF-India.

While Jammu and Kashmir has been largely peaceful since 2004, sporadic clashes between India and Pakistan—most recently in October—as well as occasional attacks by militants mean outside investment is virtually nonexistent. India produces only about 1% of the world’s pashmina supply—worth just $160 million a year—compared with neighboring China’s 70%. Babar hopes that by lifting their lives and livelihoods, the Changpa goatherds can also boost the region’s fortunes. “The [Changpa] community is not capable of fighting this battle on its own,” he says. Like the goats he strives to protect, Babar is tenacious to the end. 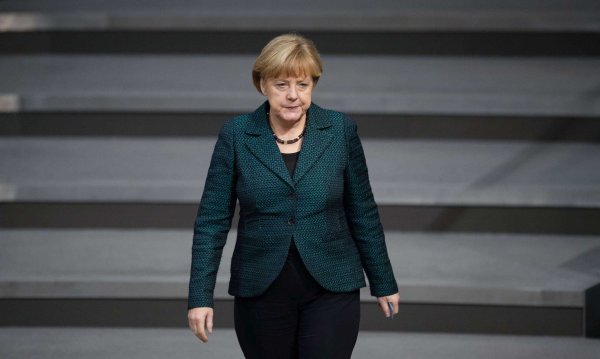 Merkel Says Russia’s Actions Are Unjustifiable
Next Up: Editor's Pick