Kareem Abdul-Jabbar: White People Feel Targeted by the Ferguson Protests—Welcome to Our World

A female protester raises her hands while blocking police cars in Ferguson, Mo. on Nov. 25, 2014.
Adrees Latif—Reuters
Ideas
By Kareem Abdul-Jabbar
Abdul-Jabbar is a six-time NBA champion and league Most Valuable Player. He is the author of the new book, Writings on the Wall.

In 1971, a riot broke out at the Attica Correctional Facility in New York during which prisoners demanded more political rights and better living conditions. About 1,000 inmates out of 2,200 took control of the prison, holding 42 staff members hostage. Negotiations went on for days before state police stormed the prison, resulting in 43 deaths. Attica has since become a pop-culture reference in movies, songs and TV shows. Even children’s shows like SpongeBob Squarepants, Teenage Mutant Ninja Turtles, and Sabrina: The Teenage Witch have referenced it. The word Attica is no longer about what happened in that prison 43 years ago but is now simply a synonym for political oppression.

I hope the chanting of “Ferguson! Ferguson!” and the symbolic upraised arms of surrender will become a new cry of outrage over social injustice that will embed itself in our popular culture as deeply as Attica did.

As always, there will be blacklash.

Many white people think that these cries of outrage over racism by African Americans are directed at them, which makes them frightened, defensive and equally outraged. They feel like they are being blamed for a problem that’s been going on for many decades, even centuries. They feel they are being singled out because of the color of their skin rather than any actions they’ve taken. They are angry at the injustice. And rightfully so. Why should they be attacked and blamed for something they didn’t do?

Which is exactly how black people feel.

The difference is that when the media frenzy dies down, and columnists, pundits and newscasters take a break from examining the causes of social evils, white people get to go back to their lives of relative freedom and security. But blacks still have to worry about being harassed or shot by police. About having their right to vote curtailed by hidden poll taxes. Of facing a biased judicial system.

That’s the reason Attica makes such a poignant symbol 43 years later. The word isn’t about a specific prison and the terrible violence there; it’s about feeling unjustly imprisoned. Many African-Americans feel imprisoned by walls that are no less restrictive for being built by lack of educational and employment opportunity than by concrete and razor wire. That’s not to say things aren’t a lot better than they were back in the ’60s and ’70s, but there still isn’t an equal playing field.

The Ferguson grand jury’s decision not to indict Darren Wilson is troubling, not just for the sake of Michael Brown, but for our faith in legal institutions. Ben Casselman’s recent article in FiveThirtyEight.com concluded that it was extremely rare for a grand jury not to indict. He cited statistics that showed U.S. attorneys prosecuted 162,000 federal cases in 2010, with grand juries refusing to indict in only 11 of those cases. Given those odds, why wasn’t Officer Wilson indicted? Not because he’s white, but because he’s a cop. Casselman reviewed various studies involving officer-related shootings and concluded that grand juries rarely indict police officers in on-duty killings.

In addition to that disturbing information is the fact that the federal government keeps no national database on officer-involved shootings. One can find out how many unprovoked shark attacks occurred in 2013 (53), but you can’t find out how many cops shot or even killed citizens. Right now, it’s left up to individual police departments to self-report (wink, wink). Even the Department of Justice has stopped releasing figures, because they were thought to be so unreliable.

So, with a tendency for grand juries to give officers a pass and with no reliable information on just how many shootings and killings are police-originated, how can people feel confident that there’s effective oversight on those officers who might be more prone to shoot unarmed black people? The police and the judicial system are the infrastructure of our society, and right now that infrastructure is as cracked and potholed as many of our highways are.

Perhaps this quote has some resonance today:

Those words are from a speech by Robert F. Kennedy—in 1968, the year he was assassinated. He wanted things to change, and he recognized that meaningful social and political change always originates among the people, not the politicians; it originates among individuals, not institutions. When enough people are frustrated about an injustice, they will raise their voices until they are heard in the courthouse, the statehouse and the White House.

That’s why I think people should peacefully protest whenever they believe there’s an injustice to be addressed. But we have to remember that the goal of protesting is to raise awareness in those that don’t agree. This is not done instantly, through one gathering. Nor is it done through the persistent occupation of one space. It has to be a national movement, and it has to keep its energy high. When enough people across the country gather to say something, more and more people will listen.

Second, the violence and looting is counterproductive because it redirects the message away from the reasoned arguments to just the emotion. The roar of the fires and the sound of shattering glass drowns out the voices demanding change. The level of frustration that leads to violence is understandable: When you’re treated as if you’re not a valued member of society, why should you uphold society’s values? But violence turns away potential allies and only provides more targets to start the cycle over again. Yes, we must be passionate about the situation, but only because our passion will fuel the open discourse.

Should the Ferguson Protesters Be TIME’s Person of the Year? Vote Below for #TIMEPOY

Third, we must focus our protests, not on the individuals that disagree with us but on the institutions that are corrupted and therefore need to change. Change is brought on by political power, and political power requires numbers. Pointing out the hypocrisy of this politician or this media pundit has no effect. But lobbying politicians with a huge voting block behind us will be effective.

While the word Attica has become synonymous with “oppression,” perhaps one day the word Ferguson will be inducted into American pop culture as meaning “justice.” 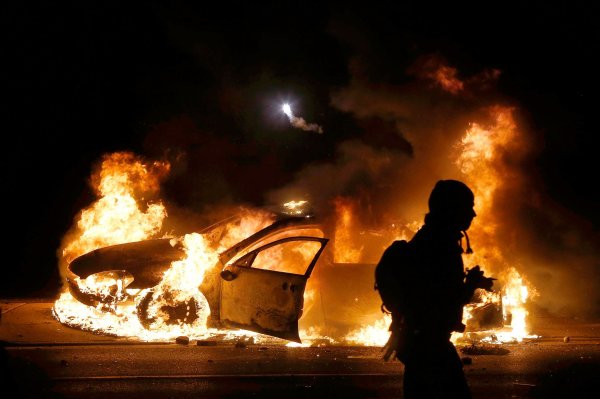 Ferguson: In Defense of Rioting
Next Up: Editor's Pick