Hong Kong student leader Joshua Wong, who featured last month on the cover of TIME’s international edition, was arrested Wednesday along with several more pro-democracy activists, after police continued their crackdown on one of the city’s three protest areas.

An activist arrested with the 18-year-old said on his Facebook page that they had been brought to a police station in northwest Kowloon. They are expected to be charged with contempt of court for allegedly obstructing the removal of barricades at the Mong Kok protest site.

By noon local time, little remained of the site, which was first occupied nearly 60 days ago by mostly young protesters demanding free and open elections for the city’s highest political office. Some protesters had started abandoning the site in the early morning. Tents, books, mats and the other detritus of an eight-week sit-in were left strewn across the road.

At its peak, the protest area — located in the heart of one of the most densely populated places on earth — was a tented community of hundreds if not thousands of students and activists, complete with supply stations, first-aid posts, a study area, library and religious shrines. Musical performances took place in the evening and academics gave lectures.

However, as police dismantled barricades and drove protesters down an eerily shuttered Nathan Road on Wednesday morning — with cleaners following behind to carry away tents and debris — traffic partially resumed along this key section of Kowloon’s major thoroughfare for the first time in two months. Municipal trucks hosed down the road and opponents of the occupation, who had massed on the sidewalks, cheered loudly.

Protesters watched in grim silence or else were seen hurriedly running down the street with bags of possessions, attempting to escape advancing police. Little resistance was offered. One man quickly genuflected in front of a cross that had been the centerpiece of a makeshift chapel set up for the protesters, then he grabbed the cross and ran.

“How can we fight back?” asked one 20-year-old demonstrator, surnamed Tsang. “We don’t have the power to fight back.”

Bailiffs began clearing the area yesterday as part of civil injunction brought by transport companies angered at the protesters’ closure of a key intersection.

Police initially gathered to ensure that bailiffs could enforce the court order, but later stepped up their action to end a protest that had sprawled across several city blocks, angering local residents and business operators for weeks. In overnight clashes, police used pepper-spray cannons on demonstrators, chasing them down side streets and arresting at least 80.

After Wednesday’s clearance, the Hong Kong Federation of Students, whose deputy leader Lester Shum was arrested along with Wong, issued a statement describing the police as the “tool of suppression of an autocratic administration” and accusing the government of daring to “use tyranny and bury justice.” It warned that if the current crackdown continued, “we will have no choice but to take our action to the next step,” but did not elaborate on what that escalation might consist of.

Police previously attempted to clear the Mong Kok site on Oct. 17 only for huge crowds to reclaim it after nightfall. This time, it is by no means certain that demonstrators will be able to do the same, even though some are already vowing to do so on social media. The police will be prepared for a counterattack, the clearance has been much more thorough, and the demonstrators are operating in a different political climate, with local polls showing that the majority of Hong Kongers want the occupations to end. The movement is also becoming increasingly divided over aims and tactics.

In the meantime, attention is turning to the city’s largest protest site, located in the downtown Admiralty district. There, thousands of demonstrators have pitched their tents in uneasy proximity to the Hong Kong Police Headquarters and the headquarters of the People’s Liberation Army. Barricades remain in place, but the site’s perimeters are not secure and provocateurs and police crisscross the area at will. The young inhabitants spend their days strumming guitars, reading political treatises, making protest art and looking otherwise unable to mount a convincing resistance of the clearance that is looking increasingly imminent.

— With reporting by Elizabeth Barber and Helen Regan / Hong Kong 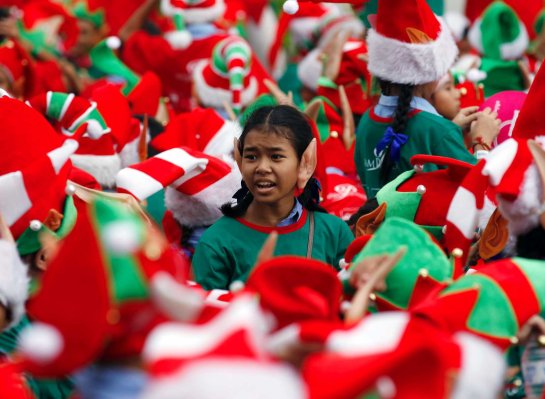 Record-Breaking Elf Gathering in Bangkok
Next Up: Editor's Pick