Dancing With the Stars Watch: And the Winner Is ...

It’s the finale of Season 19 of Dancing With the Stars, and that means either Duck Dynasty scion Sadie Robertson, Pretty Little Liar Janel Parrish, or Fresh Prince star and The Carleton creator Alfonso Ribeiro will be crowned the winner.

As Dancing With the Stars winds to a close, the only silver lining is that tonight we will finally get to the bottom of one of television’s deepest mysteries. Tonight we will not only determine who will win this popularity-cum-talent competition, but answer the real mystery of how the producers will kill two hours (three if you include the one-hour Road to the Finals special) of prime-time television for what is essentially an announcement that should take four minutes max.

So who will take home the Mirror Ball Trophy? Will the producers give it to Val Chmerkovskiy, because he’s been waiting and waiting for a win? Did Sadie’s Quack Pack flood the phone lines? Will Alfonso pull his groin putting the trophy on his mantelpiece? The only way to find out is to watch (or read this recap).

Here’s what happened on the extremely long finale of Dancing With the Stars:

Bethany Mota and Derek Hough: While Bethany and Derek were voted off the show last night, they are back in the finale because the voting audience is filled with indecisive sociopaths who want their cake and to eat it too. So Bethany and Derek were kicked off and then forced to return to the ballroom for another go-round in the Thunderdome, albeit this time without the pressure of worrying about Len’s wrath.

Memory lane: Remember when Randy Couture, Tavis Smiley, Antonio Sabato Jr. and Lolo Jones were on the show? The correct response is: Barely! Lolo was the first to leave, because while the Olympian could bobsled and hurdle, she couldn’t cha-cha. We all have our skill sets and Lolo’s was not competitive dancing. She can cry herself to sleep at night while doing the Scrooge McDuck backstroke through her Olympic medals.

Nick Jonas: Nick Jonas, currently known as The Most Relevant Jonas, showed up to sing his latest hit and remind the world that he is now hot. It worked!

Allison Holker and Jonathan Bennett: Allison, who was a new addition to the group of pros this season, brought her So You Think You Can Dance star husband Stephen “Twitch” Boss to basically show Jonathan (and the rest of the cast) how it’s done.

The outtakes: The entire blooper reel was basically just hosts Tom Bergeron and Erin Andrews cracking everyone up. Never forget that host Tom is a hilarious man, and while ex-host Brooke Burke-Charvet was excellent at holding a microphone while pointing it in the right direction, it’s nice that this season brought Erin on board, and Tom finally has someone who can keep up with — and occasionally outshine — him in the witty-repartee department.

Jennifer Hudson: J. Hud has some serious competition in the famous Jennifers department (Jennifer Lawrence, Jennifer Lopez, to name a few) but she can sing better than all of them put together, and she proved that again, belting out her hit with Gorgon City, “I Still Love You.”

Betsey Johnson and Tony Dovolani: The designing woman repeated her slo-mo dance routine to “Material Girl,” which she again completed with a full split that undoubtedly gave shivers to her grandchildren. While Betsey’s moves didn’t make the judges rethink their decision, she was clearly just there to have more fun than anyone.

Michael Waltrip and Emma Slater: The NASCAR driver opted to repeat his “Born to Be Wild” routine, because it allowed him to stay most on-brand, while dancing with the most half-dressed women, which will give him full bragging rights for when he gets back to the racetrack.

Lea Thompson and Artem Chigvintsev: Lea decided to relive her favorite moment a.k.a. the one where she got to wear a cheetah-print costume and play alpha animal to both Artem and Keo.

Artem, Keo and Allison: The show introduced three new pros this season, and two out of three of them have names that stump spellcheck, suffer from either a lack or surfeit of vowels and require frequent googling. Maybe next season!

Tommy Chong and Peta Murgatroyd: Tommy relived his best moment by rolling onto the dance floor in his lowrider with his buddy Cheech and judge Len Goodman in a red tracksuit and at least two gold chains. It was pretty exciting in a watching-an-old-man-in-a-track-suit way.

Bethany and Derek, again: While they were forced to repeat their finale freestyle, they chose to dance their Kubrick-inspired paso doble for fun (a.k.a. watching Derek without a shirt).

Sadie Robertson and Mark Ballas: For their final spin across the dance floor, Mark and Sadie delivered a dance that was an amalgam of samba and quickstep and seemingly several of their past routines. Len said Sadie’s journey was a “Cinderella story.” They earned a perfect 40/40, not that it matters at this point.

Janel Parrish and Val Chmerkovskiy: For their 24-hour fusion routine, Janel and Val had to combine the foxtrot/paso doble and their love for each other into a mesmerizing routine. Clearly, Val didn’t button his shirt. 40/40, sensing a trend.

Alfonso Ribeiro and Witney Carson: While some of us have been waiting all season to see if Will Smith would show up to support his Fresh Prince co-star, it’s clear that Will Smith just isn’t cool enough to be able to appreciate a cha-cha/Argentine tango fusion dance. At the end of the routine, Carrie Ann Inaba told Alfonso, “You’re like a glitter ball. My glitter ball!” 40/40, because at this point, why not?

In third place: Janel and Val. Sorry Val, your brother Maks still has one up on you.

And the winner is: Alfonso and Witney! Alfonso told TIME that he wanted to be on the show 10 years ago, and this is the ultimate nose snub to the producers who made him wait and wait and wait to fulfill his dream.

Read next: Dancing With Stars Watch: The Finale — Part 1 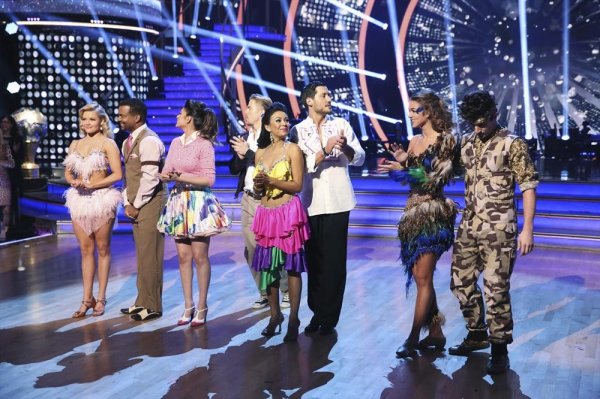 <em>Dancing With Stars</em> Watch: The Finale — Part 1
Next Up: Editor's Pick