The One Battle Michael Brown's Family Will Win

In the fevered moments after the grand jury’s decision not to charge Ferguson, Mo., police officer Darren Wilson in the fatal shooting of Michael Brown, the family of the slain 18-year-old released a statement pleading for peace — and urging people to join their campaign to get police around the nation to wear cameras.

“We need to work together to fix the system that allowed this to happen,” the statement read. “Join with us in our campaign to ensure that every police officer working the streets in this country wears a body camera.”

The crusade is understandable. No video recordings of the Aug. 9 confrontation between Wilson and Brown exist, and eyewitness accounts of the incident were often in conflict. Some said Brown had his hands up when he was shot. Others said Brown was charging toward Wilson when he officer fired. To many, a camera on Wilson’s uniform would have ended the uncertainty and potentially avoided the subsequent tumult that engulfed the St. Louis suburb.

The lesson wasn’t lost on other police departments. In the weeks after Brown’s death, numerous law-enforcement agencies around the U.S. began experimenting with body cameras. Anaheim, Calif.; Denver; Miami Beach; Washington, D.C.; and even Ferguson have all begun outfitting officers with cameras or announced plans to start. The movement Brown’s family called for the night Wilson was cleared has actually been growing since the day their son was killed.

“Police realize that they’re under greater levels of public scrutiny,” says Art Lurigio, a professor of psychology and criminal justice at Loyola University Chicago. “And the Michael Brown case is elevating this urgency. It’s bringing this discussion of cameras to a more fevered pitch.”

For police, cameras have the potential to offer visual evidence of confrontations, which could provide a level of public transparency and potentially save law-enforcement agencies millions of dollars in legal fees spent fighting and settling suits brought by citizens.

But only a few studies have been conducted on the effects body-worn cameras. The most frequently cited came out of the police department in Rialto, Calif., which found an 88% drop in the number of complaints filed against officers and a 60% decline in use of force incidents compared with the year before officers adopted cameras.

(MORE: All the Ways Darren Wilson Described Being Afraid of Michael Brown)

Most experts say that the Brown case has accelerated a discussion about cameras that was already taking place inside many of the country’s bigger departments thanks to the ubiquity of camera-equipped phones.

“The big question is not whether or not agencies will adopt body-worn cameras but the sorts of policies that will be put into place to monitor and control the use of this new technology,” says Victor Thompson, an expert in race and crime at Rider University in New Jersey.

For instance, Thompson says a camera that can be easily turned on and off at the discretion of an officer may be of little value because it would allow that officer to control what’s ultimately being recorded and fail to provide the kind of transparency activists are calling for. Other experts advocate establishing rules about how and when the cameras are used along with clear protocols for review of video footage and sanctions against officers if they fail to comply.

Not all cops are on board. As police departments increasingly experiment with making officers a mobile surveillance pod, some police unions are pushing back. They argue that having to turn on a camera during a threatening situation could lead to deadly consequences at a time when every second is important.

Such resistance is unlikely to stop the spread of cameras. In recent weeks, police departments in cities such as Cleveland and Dallas have announced plans to put cameras on officers or expand existing wearable programs.

“In 10, 15 years,” Lurigio says, “I think we’ll be talking about the camera in the way that today we talk about the baton or the badge.”

Should Ferguson Protestors Be Person of the Year? Vote below for #TIMEPOY 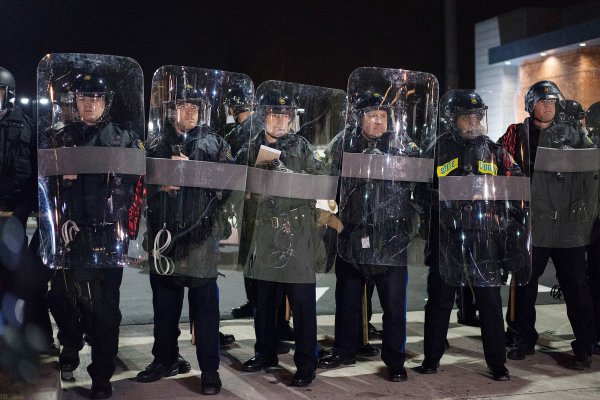