In 1938, a TIME reporter marveled at the artificial snow falling in the display window of Lord & Taylor’s on New York City’s Fifth Avenue. Major retailers were just beginning to invest in their displays to entice potential customers ahead of the Christmas shopping spree, and the reporter was impressed.

“All this not only added melody to Christmas shopping but made the Avenue’s 80,000 daily pedestrians acutely aware of an artistic rivalry which has begun to show signs of lustiness,” the reporter wrote in the December 1938 issue.

As that TIME story attests, the competition for consumer dollars over the holidays is nothing new. As far back as the 19th century, the window between Thanksgiving and Christmas has been considered primetime for shopping. In fact, the retail industry was so intent on squeezing the most sales out of that period that they convinced President Franklin D. Roosevelt to push the Thanksgiving Holiday forward to the third Thursday in November; the new date failed to catch on or spur shoppers, so President Roosevelt reversed the change in 1941. (Read more about that decision here.)

But that doesn’t mean that Black Friday, the shopping bonanza the day after Thanksgiving, has an equally deep past.

Until recently, the largest shopping day of the year was not Black Friday but the Saturday before Christmas, says Jesse Tron, the director of communications for the International Council of Shopping Centers. According to one TIME article from 1968, the seasonal shopping rush didn’t even really begin until the Saturday after Thanksgiving. In fact, TIME didn’t use the term to refer to the Friday after Thanksgiving until 1998. (Black Friday had traditionally referred to the financial crisis of 1869.)

So how did the pseudo-holiday take root? The term itself is traced back to Philadelphia in the 1960s, where police used it to label the crowds of shoppers and ensuing traffic jams. It would later be explained apocryphally as the day that retailers begin to make a profit–or go into the black–after months in the red.

Indeed, the term was eventually reappropriated by the retail industry, which had begun in the 1950s and 1960s to offer sales that Friday in order to woo shoppers, who often had the day after Thanksgiving off from work (to shop, so the retailers hoped). The day-long shopping spree gained traction in the Internet age, when sales and coupons could be more widely publicized. By 2002, Black Friday had indeed become the biggest shopping day of the year.

Read TIME’s 1961 cover story about how Christmas became a gift-giving holiday: But Once a Year 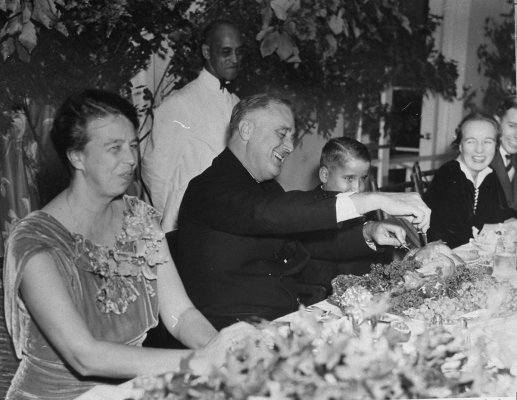 FDR Moved Thanksgiving to Give People More Time to Shop
Next Up: Editor's Pick