Like It or Not, Uber is Transforming Life in Middle America

In cities around the world, Uber is fighting for its life. On Monday, Portland, Oregon, sued to force the company to stop operating after it opened up shop without the city’s blessing. This comes on the heels of a statewide Uber ban in Nevada and a crackdown on the company in New Delhi following a rape accusation against a driver.

Many of Uber’s problems are of its own creation, a result of its extraordinarily fast ascent and equally extraordinary hubris. The company has managed to marry runaway success with a corporate culture that evidently permits executives to say and do some incredibly stupid things. And Uber drivers may have been involved in some truly scary assaults (which is not to say that traditional taxi drivers haven’t). But as taxi drivers, regulators and a critical media push back against the young company we’re faced with a baby and the bathwater situation. I want to make a case for not throwing out the good with the bad.

I asked my network of friends who live outside the beltway and west of the Hudson River if, and if so, how, ridesharing had changed their lives.

“In a city like Houston where you can’t get a cab on the street (or very quickly from a call most of the time) it is life changing to have cheap car service available within minutes,” says Brandie Mask, a 29-year-old attorney. “Also, it’s great to have the same service in different cities so you don’t need to figure out the cab situation in an unfamiliar place. You just open your trusty app.”

When I posed the question to people in Tulsa, Oklahoma, (my hometown) the responses were unanimous that the recent introduction of ridesharing companies into the city had changed for the better how people move around town.

“I use Uber a lot in Tulsa,” said Mike Villafuerte, 35. “I been using them since I’ve had back surgery and also suffer from fibromyalgia. Last year I was in ICU for a month. I survived and I’m a big user of Uber to get to my doctor appointments.”

Amanda Gammill, 31, who lives with her husband in a suburb just outside of Tulsa, reports using ridesharing services while traveling and even on a night out in Tulsa though she owns a car. “We use it so we don’t get lost,” Gammill says. “And if we happen to decide to drink, we are safe. Cheaper than tolls, parking etc., and no risk of break in.”

The drinking and driving issue is key because in many cities rather than find a taxi dispatcher’s phone number and wait unknowable amount of time for a generally unclean car that may never come at all the truth is that many people just drink and drive. The question has come up before, as analysts—most notably Uber itself on its blog—have tried to parse out any correlation between a decline in DUI’s and the introduction of Uber into a market. Whether or not that is a causal relationship is a question for the statisticians but as a matter of cultural change there is no question as to the cause and its effect. By allowing people to efficiently get affordable rides between any location around town, ridesharing services are utterly transformative in the car-bound cities of Middle America.

In parts of the country where taxis are unreliable at best and public transportation is spotty if it exists at all, ridesharing links neighborhoods and opens cities up to the carless—or less car-dependent—lifestyle that many of todays urban professionals seem to prefer. Cities that shut down ridesharing services at the behest of grumbling taxi companies send a clear message to young professionals—move somewhere else, because this town ain’t for you. But just like it’s not only the kids these days who send text messages and have Facebook accounts, its not just the young and hip who use Uber.

Jason Boston, a driver for Uber and Lyft in Cincinnati, says that while he gets a lot of passengers in the younger set there’s a whole cohort of retired people who he sees using the services too. “I think the unique thing about the retirees,” he tells TIME, “is that they typically don’t go out that often but these new services allow them to go out with safe reliable options to get to and from a destination where they may have a few drinks.”

Last year I was at home alone in residential Washington, DC, attempting to fix a broken window when I slashed my arm on a piece of broken glass. I hardly needed an ambulance but I don’t own a car, wasn’t going to wait around for the bus and, with one arm useless and a belt tourniquet held taught through my teeth, I wasn’t inclined to start calling dispatchers trying to find a cab. So I opened up an app and caught a ride to the emergency room. That ride literally saved me hundreds of dollars.

The above is an extreme example but it illustrates how powerful ridesharing apps can be. In much of the country—especially the places between the coasts where most policymakers and national media people don’t live—the changes brought about by ridesharing aren’t trivial. Uber needs to grow up and all ridesharing companies need to make peace with regulators but cities that shutdown these services are likely to fall behind cities that don’t. 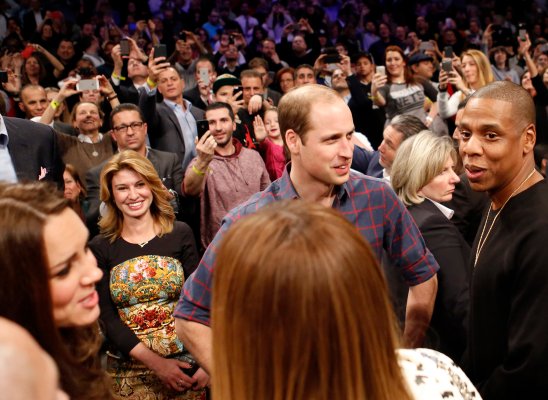 What Twitter Thought When Beyoncé and Jay Z Met Will and Kate
Next Up: Editor's Pick